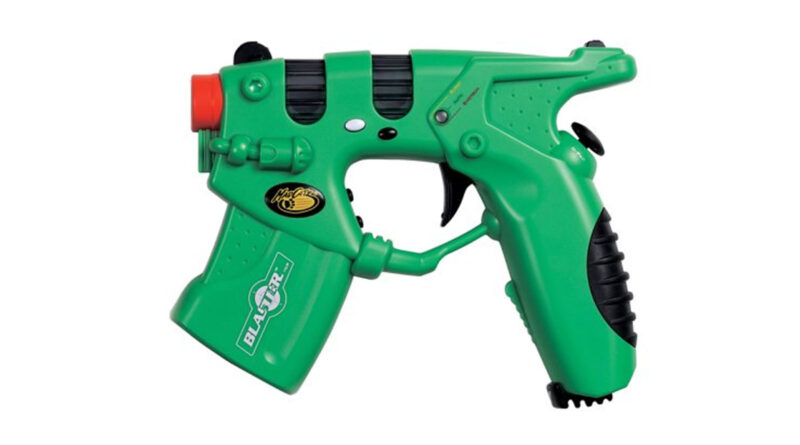 As I write this review, something struck me. Before the very first game on Xbox that supported a light gun was even released there were already two light-guns on the market waiting for House of the Dead III.

One by Thrustmaster and this one I am reviewing here, the Mad Catz Blaster.

To look at it looks rather strange and visually not a patch like the Thrustmaster alternative, but looks aside this does have a lot going for it. First off I was very pleased to see a lot had been thought about such as the memory card slot situated at the front grip. If you look underneath, hidden away is the chance to stick in your memory card and save or load away to your hearts content. This is something the Thrustmaster Beretta doesn’t have due to its much smaller size.

Thanks to the larger size given to this Light Gun, also bundled inside is a vibration motor to feel all those attacks and shots. Again something which the competition from Thrustmaster didn’t include due to size limitation. These two additions to this gun make it straight away a firm leader in the Light Gun for Xbox race. Also compatible with 50/60 and 100hz Televisions.

So plenty of features but what about the actual use of the gun. As I have already mentioned the gun does look rather odd and the green although inspired from the colour of the Xbox, doesn’t appeal on the gun one bit. Thankfully the grip and feel of the gun is very solid and comfortable although not as comfortable as the Thrustmaster alternative. The grip at the rear of the gun does help especially after long shooting bouts but the trigger sounds and feels a little cheap. It doesn’t feel like a gun either and the buttons are not as well positioned as I would have liked.

The D-Pad is nicely placed and feels fine, but the start and back buttons are located near the trigger. The only way to push these buttons is to either stretch your trigger finger to extremes or use your left hand. I would have preferred them to be nearer the D-Pad but hey you can’t have everything. As you grip the gun you can also reload with a click of a button located below the trigger in an easy to reach place, which is a plus but the Thrustmaster has this also.

Choosing between the Thrustmaster and Mad Catz Light Guns is difficult. What one has the other doesn’t and vice versa. For me what it comes down to is the vibration motor. Although the Thrustmaster gun is better looking and better thought out in button positioning, the Mad Catz Blaster has a vibration motor which the Beretta although lovely to use and a pleasure to look at, makes quite an impact on the game experience. So if I had to choose it would be this gun even though overall the score is lower. You just can’t ignore the memory card slot and the vibration motor on a device like this and with all its little niggles this gun shows that features are a must and vanity is less important.

The score doesn’t help show this gun. It does have flaws but does also have some strong merits like the all important vibration. A hard choice between the 2 Light Guns reviewed but it all comes down to the vibration. A worthy contender but could do with some refinement. 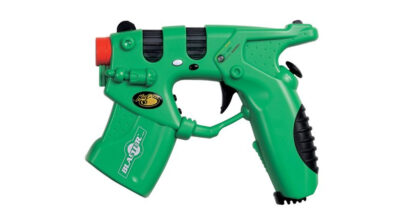