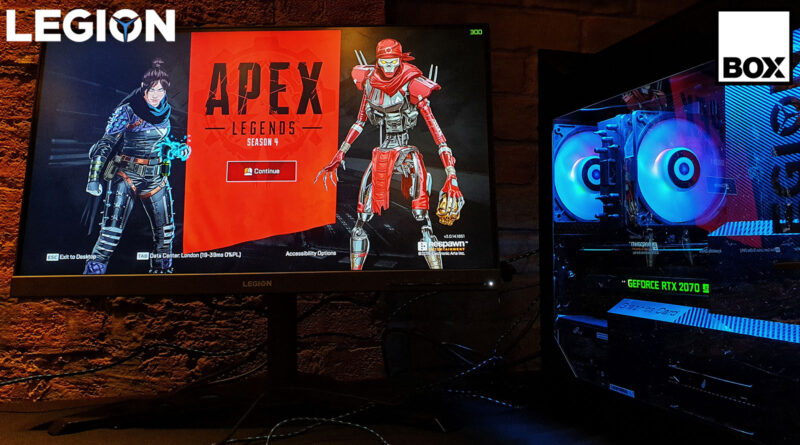 Picture the scene… It’s a cold March Monday evening, it’s starting to get a little dark outside as commuters after a long day at work race to the train station to return to the comfort of their homes. Yet, here I am going in the opposite direction and heading towards the centre of Birmingham as I’ve been invited to view the latest Lenovo Legion devices and accessories at an event hosted by Box.

So first a bit of back story for you. Box are an online retailer in the UK that have been around for over 20 years now, specialising in technology with the usual range of equipment and a nice focus on gaming with racing chairs, laptops and other delights that are sure to entice you into exploring their offerings. They have also expanded their focus, with a growing home appliances range too – so now I am really looking forward to the RGB gaming fridge freezer (if only!), but for now at least let’s talk gaming laptops and some of the accessories on display at their event.

My eyes were certainly drawn to the Lenovo Legion Y740S, a supremely thin and light device and somehow still manages to qualify as a gaming laptop, according to Lenovo at least – with the latest 10th generation up to Intel Core i9 processors if you really want to go to the very top end. The screen can push up to 600 nits and is even Dolby Vision certified. The 60Hz 15″ display may not be the fastest available, but it still looked pretty darn special in a room that was quite challenging with its own random lighting conditions.

It’s not as flashy in terms of RGB keyboard lighting as some of the rest of the range may demonstrate, however in a coffee shop – probably better you aren’t carrying a disco light extravaganza with you anyway. At the end of the day, this really is about performance and portability, but next to the Y740S was the necessary ingredient to really push the gaming angle to the maximum for when you plonk yourself back at home or in the office which I will come on to in a moment. No UK pricing was announced at the event for the Y740S, but in the US at least – the starting point is $1099.99 with up to 32GB DDR4 memory supported.

The Lenovo Legion BoostStation is as what the name implies, gives that extra kick up the gaming backside to push those pixels onscreen even harder.

Available as just the eGPU enclosure for $249.99, the BoostStation can also be bundled with a NVIDIA GeForce RTX2060 or AMD Radeon RX 5700 XT graphics card – although the enclosure supports right up to the RTX2080 Super too. Connecting to the Y740S laptop in this example using its USB-C Thunderbolt 3 port, it certainly provides the whizz, bang, wallop to deliver your gaming desires or heavy workstation requirements for productivity. A nice little touch is the inclusion of an internal 3.5″ / 2.5″ compatible SATA HDD or SATA SSD connection within the BoostStation, so rather than just a range of USB ports, RJ45, HDMI to add to the GPU itself – you also have internal storage within to expand the laptops file space if you so desire.

When I consider how in the very recent past, obtaining 60fps in gaming was the holy grail and yet here today I witnessed firsthand 240fps on a 24.5″ Full HD IPS panel with the Lenovo Legion Y25-25 Gaming Monitor. Getting my head around this figure still bamboozles my senses, but if you really are a hardcore gamer, those extra frames rushing past your eyes really can make all the difference between you or your online opponent getting that all important kill, or frag if you prefer. The Y25-25 supports AMD FreeSync, 400 nits of brightness and will retail for around $319.99.

PC gamers for a while at least were almost forgotten as consoles became more and more powerful and indeed popular, however with so much choice in the Windows 10 powered space now – the range by Lenovo and others have made PC gaming even more relevant and dare I say, a healthy competition in the status stakes. It’s no longer enough to be lethal in your online prowess, your rig is now the extension of your gaming representation – just like in the car space the huge amount of body kits available provides that extra jaw dropping impact. It may not be the cheapest endeavour this new gaming prowess around us, but it sure is fun to watch, even if it is just as a spectator.

Thanks to Box.co.uk and Lenovo for the invitation to view the latest gear, it was certainly a fun excursion into the world of fast framerates and boundary pushing eGPU performance.