Lego Star Wars was an absolute triumph. I remember viewing it way back in 2004 at the now deceased Game Stars Live event and thinking to myself, this is just plain stupid. Like many I had already dismissed the premise and fairly hastily trundled over to the Halo 2 booth only to find ridiculously long queues. My opinion quickly changed after getting my hands on the controller in the comfort of my own home.

The appeal stems from its wacky cut-scenes, adorable animations and zany antics. Although the characters never speak (this is a blessing!), the grunts and chunters provide enough vocal dialogue to allow the gamer to appreciate the amusing on screen humour. Lego of course adds a completely new dimension as well, with its building offerings and child friendly destructible nature, innocence in gaming can be blessed with even the adults admiration and respect. It is Lego after all so the phrase ‘knock your block off’ never made more sense. 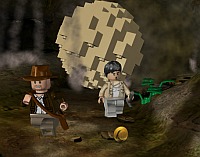 The game isn’t perfect though. The screen tearing is horrendous at times and although there is a V-Sync option you can turn on in the menu that will remedy this, you will then suffer vastly reduced frame rates. A pity…

The second problem is the most uncomfortable to bear and seems absolutely unforgivable. There is no online co-operative! This is almost like making a pot of tea and then leaving out the hot water. It puzzles me why certain titles that have already set precedents in a series, then ignore this essential gaming requirement. Yes you can still play with a friend on the same console, but come on this is the 21st century. Please give us a patch that will remedy this silly omission or have we got to wait for a subsequent version with the 4th Indiana included? I hope not. 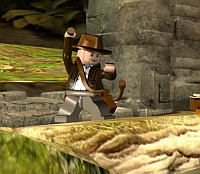 The puzzles I find far more interesting in Lego Indiana Jones compared to the Star Wars versions. Maybe playing as a heroic archaeologist (we don’t get many of those) allows for far more digging, searching and treasure hunting than the Star Wars concept could ever provide. It almost feels like Tomb Raider at times and this is no bad thing at all.

There have been some comments by certain reviewers on the Internet suggesting that it would be nice to see the surroundings made of Lego as well, however I would strongly disagree. The details in the environments would be drastically cut and the characters would no doubt lose their charm if everything looked so basic.

Just like the original Star Wars trilogy, Indiana Jones has enough memorable moments, ear tingling orchestral performances and diversity to spike anyone’s interest. For around £30, it is certainly worth a look especially if you enjoyed the previous Lego incarnations. The puzzles, graphics and licensing is enough to tip anyone over the edge invoking fond flashbacks of a movie genre that until recently was almost forgotten.

My anticipation is at tingling alert as I await the release of Lego Batman.