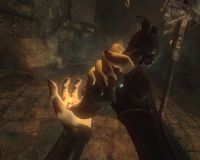 Clive Barker’s Jericho could have been an absolutely stunning game! The graphics look extremely fitting for the desired horror and super natural stance the atmosphere creates, the team based gameplay had great potential and it is something quite different from the usual first person shooter, however this is where of course I go, well hold on a minute, the game is actually just silly.

It reminds me so much of a PC game called ‘Kingpin: Life of Crime‘ due to its shared amount of swearing just for the sake of it. To be honest, I am never one to support swearing in games, but when used liberally it can increase the drama to a cut scene, but as with quite a few games who love these higher banded age ratings they receive, swearing is normality and it spoils the game for me. Not to mention some of the other really vulgar comments that spew out. There is even reference to lesbians and the like, which just made me shudder with disbelief.

It is a shame, a shocking shame, that with what could have been a great game and something a little different, became this shoddy swear fest, with lowest of the low humour. There are flaws with the gameplay, the level design is a little basic at times and the team AI can be a little thick, but it could have been an enjoyable romp through the jaws of the sinister folk.

Oh well…. Back to TimeShift and The Simpsons Game I guess for now…

My Xbox Live and Beyond Article – 360Zine

So you don’t like swearing; fair enough. Could you elaborate on the gameplay flaws though, as that is more of a reason to dislike a game?

Some of the characters have very basic weaponry and are not very much fun to use. Although having different weaponry is required for each character to stand out, you do end up with some quite weak selections.

The team AI has a talent for getting themselves killed very easily and when swapping between members is part of the gameplay, this makes for a lot of frustration to get past certain areas.

If you can look past the swearing and stupid low humour, there is a good game there, but as I mention in my post, the game tries too hard to be ‘F’ this and ‘F’ that in a hope that it will be seen as a hardcore experience, which instead comes over as poor acting and needless conversation.