Skip to content
You are here: Home > Gaming > It’s Gaming Jim, But Not As We Know It!
Gaming
September 8, 2006December 18, 2007 James Woodcock 0 Comments Console, Gaming, James Woodcock, Next Generation 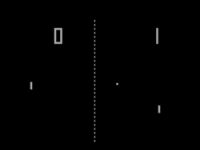 Here we sit with the so called next generation of gaming, but what really has it brought us that we didn’t have before? Many people are asking themselves the question of where the future of gaming will take us, but at the moment there are two very distinct camps, that of innovation and that of brute power.

Marketing technique deployed at the moment will try to convince us that it is the controller device that will make the difference in our gaming future and others that graphical excellence and computing power that will save the day, but actually in my own opinion both are very wrong. You might also say that it is the requirement for both innovation of controllers AND graphics that are important, again I think you would be wrong…

Why did we spend so many hours playing on our Commodore 64 or SEGA Megadrives? You would be right in suggesting that power and the way information is displayed does make an impact, but there is a severe lack of true innovation in the area of new gaming models. For far too long now, developers have been comfortable churning out the same type of genre be it first person shooter, sports, beat em up or any other type you can think of. We live in the era of tweaking, nothing more.

Tweak the graphics, tweak the Artificial Intelligence (AI), tweak the controllers, tweak the sound and the list goes on. Enhanced graphics engine, enhanced AI, how often have we read this in a press release or gaming site preview? To be honest even I (although I do love my Xbox 360) am getting a little tired of the same old stuff. I believe we are craving for something exciting and new never quite done before…

The reason most of us oldies (in gaming terms anyway) have fond memories of the past is because every year we felt we had been treated to something completely new and satisfying. This was made easier for developers to entice us due to the big differences in the way games could be presented on screen. From simple lines followed by sprites and then polygons. Minuscule colour selection followed by 256 colours and now millions of colours. New genres would pop up very quickly due to the drastically different capabilities of hardware over time. Now we just read about how many more polygons it can push from the previous generation, how much data can be stored on the disk etc.

Today we look forward to games with less appeal due to the dreaded year number after the title (FIFA 99, FIFA 2000, FIFA 2001, FIFA 2002 etc). Sequels and worst of all… prequels now infest our gaming lives, which leave me feeling very numb.

A single developer or team somewhere has got to come up with a new gaming concept and no it isn’t hardware or peripherals that will breed this change, only the limitations of our imagination. Having more powerful hardware and new ways of interaction is only a fraction of the whole story and instead new game design with a brand new thinking has to evolve to really propel gaming into the 21st century. Gaming is at risk of becoming extremely stale and following the path of Hollywood movies with its unoriginality and licensing methods.

You young game developers out there can help though… the future rests in your hands and I ask you all to get your thinking caps on and create something we have never seen before in the years to come! I don’t pretend to have the answers, but I do know we are on a rocky path if something isn’t done by the next, NEXT generation of consoles. The challenge is there to be grasped, but who is going to be brave enough to try something so radical?

It is also up to the publishers to back the developers who are willing to try something so very different! There will be failures, but whoever finds the correct formula I imagine would make a very handsome profit.

A Story of a Freelance Journalist – Industry, Experience & Advice