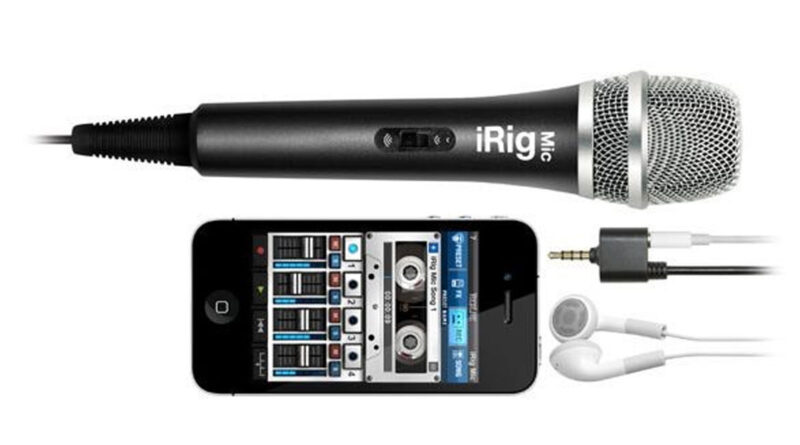 Ever since mobile phones became far more than just a device to make telephone calls, the abilities they provide have extended with amazing advancement. The release of smartphones has increased this potential greatly and this is further illustrated by IK Multimedia’s iRig Mic.

Although Apple devices often include a built-in microphone, there are occasions when a much larger external variant is required and here IK Multimedia have provided not only a microphone, but a selection of software (otherwise known as apps) to assist in both recording, editing and enhancement of your captured performances or presentations.

The accessory by IK Multimedia is a handheld condenser microphone, ideal for various activities where recording sound is required and the internal mic provided by the Apple device doesn’t fulfil your expectations.

The iRig Mic plugs into your iPhone, iPod Touch or iPad via the headphone port, however you can still plug in a set of headphones with the microphone connected as the connection features an additional port with this in mind. This makes it possible to listen in to the sounds that the microphone is detecting, adjusting the settings accordingly before any actual recording takes place.

On the microphone itself is a gain control switch to select one of three different sensitivities. The lowest for any loud sounds that need to be captured, which may include music. A moderate setting, which seems to work well in most scenarios including capturing speech close by and another option for very faint sounds.

To hold, the iRig Microphone is fairly weighty however I feel this indicates build quality more so than any negative skew you may otherwise place on this aspect. The length of cable supplied should also be plenty and certainly if you keep for example your iPhone in your pocket while you hold the microphone in your hand, there is still plenty of play left if you need to reach out to capture someone else next to you.

The iRig Mic also comes with a very handy case for storage, which holds the microphone very comfortably.

There are quite a few options available to you when using the iRig Mic. Firstly, it should be pointed out that although IK Multimedia have a varied selections of apps available intended for use with their microphone, you can however use the accessory with any recording app due to the fact it uses the port on the device that any external microphone can use.

When receiving this accessory, my own intention was to use it as an interviewing device. So now I can set up the audio recording software on my iPhone to capture the audio, place the phone in my pocket and use the microphone to present and interview other people while still being able to move around a room or building. Of course, with a camcorder in use as well – you can record video separately and when later editing in the comfort of your home, combining the audio recording from your iRig Mic with the video captured separately on your camcorder. It works surprisingly well in this instance if you have the right software, however much more can be achieved with the iRig Mic.

As with most external microphones, the world really is your oyster.

Whether you wish to capture musical instruments, speech or just sounds around you – the iRig Recorder app and others besides allow you to invest plenty of your free time in all manner of creative pursuits.

You may wish to simply record a presentation and again the iRig Mic offers up a far better solution than relying on your Apple devices own internal microphone offering.

For the singers among us, IK Multimedia also has a free app (with additional features for an in-app purchase) to capture and enhance your vocal talents with all manner of effects and tweaks named VocaLive.

Unfortunately the main problem I have found with the iRig Mic is the sound quality. There is quite a lot of background noise even in a perfectly silent room, which will certainly diminish the more serious professional musical aspirations you may have yet there is still plenty of room for amateurs to enjoy themselves immensely at the possible creative results.

Secondly the recording format iRig Recorder saves your captured audio sessions as isn’t exactly a standard *.wav recording. Even on my Adobe Audition CS5.5 professional audio editing software, I had to convert the audio with another program to allow me to successfully edit within my favourite software. You can also record in the more compressed *.m4a format for those who have compatible audio editors that support the format.

Your recordings can be exported easily within iRig Recorder to e-mail, iTunes file sharing, Wi-Fi, FTP upload and SoundCloud. Wi-Fi is one of the easiest as when this is selected, an address is provided which you enter on your web browser and hey presto you can download the audio recordings to your computer.

The iRig Mic is an enjoyable addition to your Apple device and includes a variety of uses that will push your smartphone into even more exciting territories. Whether you wish to record yourself singing or speaking, refer back to the audio from a presentation or capture a musical performance – the iRig Mic and apps allow for it all.

The main downside is there is quite a bit of noise in the recordings and the format they are saved in isn’t exactly a typical wave standard, however even with these failings the iRig Mic is a fun filled accessory for your iPhone, iPod Touch or iPad if you wish to extend its capabilities and tap into your creative aspirations on a regular basis. 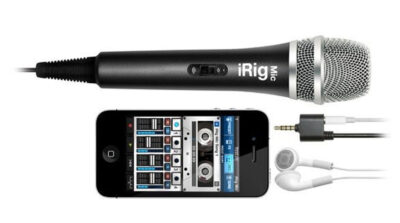