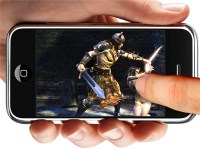 Before I owned an Apple iPhone 3GS, I would usually place my Sony PSP or Nintendo DS in a bag to take on a long trip. Both the PSP and DS are good companions when you need to pass the time when your heavy consoles and large screen TV refuse to fit in your pocket no matter how hard you may try. This all changed though when I purchased an Apple iPhone 3GS. I am sure many of you will be able to relate to this tale of portable gaming abandonment and it shows how precarious the future is for such dedicated devices that concentrate on this area alone.

The reason is pretty obvious. Your phone is always by your side giving you the opportunity to grab a few minutes with a game or two in any moment of unforeseen boredom and with the release of the iPhone, steadily it has been pushing its rich gaming virtues towards the consumer with ease as it convincingly offers a huge assortment of titles, genres and price schemes. Developers have been quick to react to this ever growing trend and some even prefer this platform to work with compared to its dedicated portable gaming equivalents. The Sony PSP Go and Nintendo DSi may be trying to tap into the downloadable titles option rather than the requirement to pop along to a shop to purchase a boxed version, however the iPhone and indeed iPod Touch library is just staggering and the quality impressive.

Of course there are the average and indeed terrible offerings in any vast library, but you only have to read a few reviews here on my website and elsewhere to quickly realise that the iPhone has more than enough hardware power and software features to not only compete with Sony and Nintendo, but also surpass. Remember this is a mobile phone, and not so long ago these devices that offered a gaming aspect were often mocked with their very basic 2D shooters or puzzles with tinny MIDI music and often without any sound effects. Times certainly have changed and many new phones and not just from Apple, offer a tantalising gaming experience which will actually influence the make and model of your next phone.

Broken Sword: The Shadow of the Templars – Director’s Cut, Bejeweled 2, Peggle, Sonic the Hedgehog, Rock Band, Wolfenstein 3D, Simon the Sorcerer, Monkey Island, Rally Master, Real Racing and so many more worthy titles to indulge in (feel free to name a few yourself), the Apple iTunes Store offers such wealth and depth that my iPhone 3GS has now not only succeeded my PSP and DS as my portable gaming hardware, but actually replaced them almost completely. This is not just down to convenience either, but the power and the quality available.

There is still a place for the Sony PSP and Nintendo DS as not everyone has the money to either pay for the phone itself or commit to a monthly contract, however in a year the lines are going to become very blurred. The iPod Touch does offer a cheaper way in to this area if the titles on offer do intrigue you.

So the question I put to you is, will we ever see a future generation portable gaming device such as the Nintendo DS with phone features?