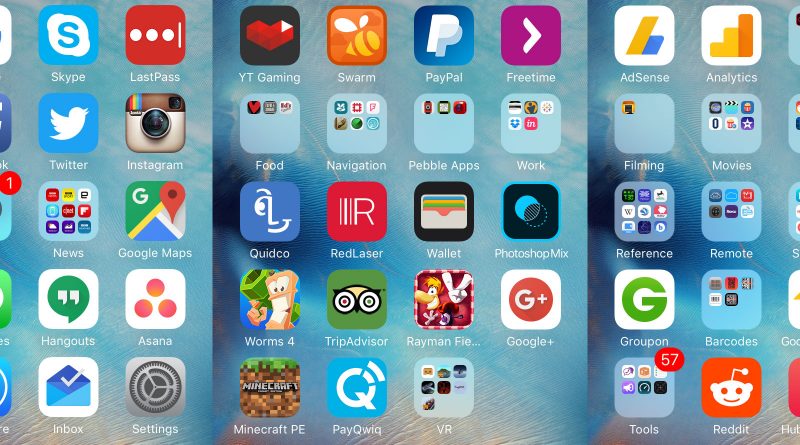 My very first smartphone was the iPhone 3GS. At the time, it felt absolutely amazing. From a phone, I could now check my email, surf the internet, post on Twitter and so much more. It was a special time indeed when technology, and maybe even a sprinkle of magic, resided within my grasp.

For the years that followed, I purchased the iPhone 4S, iPhone 5S and now of course this will come to no surprise that my current phone is the iPhone 6S. I have remained loyal for many years, however due to my career I have access to countless Android and Windows Phone handsets. It is with this access to the ‘other’ side, I realised a long time ago that the iPhone and the iOS platform is stuck in the past. Even worse, Apple continue to look inwards pushing hard their own services and restricting third-party access.

So let me break this down a little…

Compare the very first iPhone with the iPhone 6S and you would find it hard to notice a great deal of difference within the home screen interface. Sure, folders added a much-needed convenience for organising the vast array of downloaded apps, but if this is all we can cling on to, then we really are in trouble. Instead, I stare longingly at the screen for something that excites me. Windows Phone and the successor Windows 10 Mobile feature Live Tiles, which I love for the at a glance information provided and the sleek animations, while widgets are an important part of Android. iOS… well what on earth does iOS have?

iOS… well what on earth does iOS have?

It has dazzling colour, since iOS 7 anyway. A colour infusion in fact that scared most of us at first, although it has settled down somewhat over the years. Sure, iOS has also added a notification area with widget-like customisation and quick access controls depending on how you swipe on the screen, but these are merely bolt-ons to a rapidly ageing platform. Nothing and I mean nothing about the iOS home screen interests me anymore. 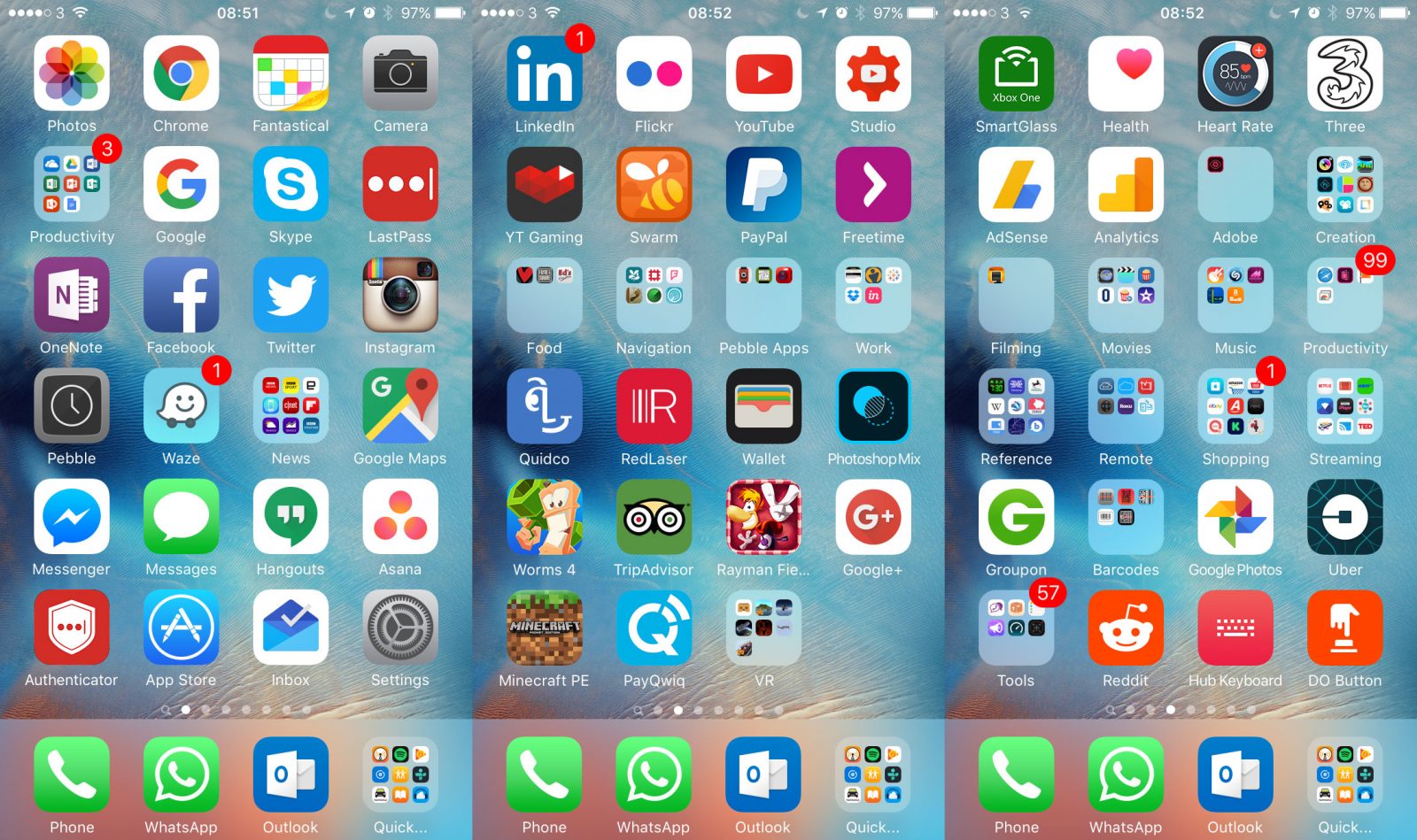 The same rows of icons just sit there, and I am sorry but an animated clock is not enough. I often wonder why after all these years I still can’t use the home screen in landscape view on an iPhone 6S?

Granted, Apple users feel safe knowing that these familiar icons will be there waiting for them and the risk of changing to something new could potentially cause a backlash from the Apple faithful. Be brave, be strong Apple, otherwise slip further behind in this key interaction with the device.

Many of us, including myself loved the idea of using their voice to control certain aspects of their phone. It was quite gimmicky at first, however the potential for the future is what kept us interested. What would Apple add next to this voice interaction? Could we one day simply talk to our phone using a natural conversation and watch as our phone scheduled, messaged, reminded and directed us? The answer currently is… no. Not even close.

Instead, Siri is a bit of a joke. Yes it will tell me a joke, but only after it fails to recognise my voice, completely misunderstands my question, incorrectly fills in a text message and rather than turning an iPhone into the perfect hands-free device, you will actually find yourself shouting, cursing and bashing on the display to prevent any embarrassing moments. Google Now on Android however is far more adept at recognising commands and even Cortana on Windows 10 Mobile shows a great deal of promise and is available on the Windows 10 desktop.

Instead, Siri is a bit of a joke. Yes it will tell me a joke, but only after it fails to recognise my voice.

Siri hasn’t even found its way to OS X yet, so it can’t just be us who are waiting for something to ‘happen’ with Siri – even Apple doesn’t seem confident.

iPhone 6S and the larger 6S Plus introduced 3D Touch, a new way of interacting with the display. Pressing lightly and then harder is in theory designed to be a quick method of previewing content or activating additional commands and menus. It is essentially the iPhone’s ‘right click’.

‘Peek and pop’, the bizarrely named preview system. Just one problem, to peek (or view a preview of say an image or message) requires you press down on the screen, except by doing so your thumb covers most of the preview. It is a superb way of opening up a larger image so you see what temptingly hides within, yet annoyingly your thumb becomes the main view. I know what my thumb looks like, I have seen it every day of my life, yet there it is obscuring the preview. If I press harder I can ‘pop’, or should I say open the section fully to see the message or image within. It might have been more useful just to open the message as normal, I could then dare to hit the back menu button.

It does then beg the question of why 3D Touch is superior to simply pressing and waiting a short time?

Other apps are adding 3D Touch-like functionality for devices without this feature by allowing you to hold your thumb over an area for a preview to appear. It does then beg the question of why 3D Touch is superior to simply pressing and waiting a short time?

Then there are the quick access menus on the home screen. Oh gosh, we are back to the iOS home screen… So, the few apps that support this feature require you actually know they are there to make any use of them. Pressing harder on app icons that recognise this functionality reveal a menu with up to 4 links that will jump to a specific area of the app. Great in theory, but in practice I hardly ever use 3D Touch. It actually makes iOS 9 more confusing as you are looking for hidden aspects of iOS that only make their appearance by experimenting with your hard presses.

I own the Pebble Time smartwatch. For personal and work notifications, it has become invaluable in my day-to-day activities. I always feel in the loop and rarely miss phone calls, messages or emails. The watch is also compatible with Android, and truth be told the Pebble Time is capable of so much more when using this platform. On Android for example, I could use my voice to respond to messages from a huge array of apps, something of course the Apple Watch can do. Why would Apple allow this with a Pebble Time when it is in their interest to restrict capabilities to alternative smartwatches… grrr… So as much as I love the Pebble Time, I know that there are more features and greater functionality awaiting me elsewhere if only I connected it to an Android phone.

The watch is also compatible with Android, and truth be told the Pebble Time is capable of so much more when using this platform.

Wait one moment, this is where we now turn our attention to third-party keyboards and where we might possibly see a hint of greater access to something other than the stock Apple solutions…

When Apple announced support for third-party keyboards, or the ability to use another style of keyboard instead of the standard one Apple provides – again we all started to hope again. Apple, which is usually so keen on insisting we stick with everything Apple might be showing signs of a new openness, maybe this is just the start!

Well, again disappointment. Third-party keyboards are slow at loading and sometimes refuse to even appear on the screen. You are best sticking with the default keyboard as at least you can depend on this to open when you need it. It is simply, a mess, and so frustrating to use.

iOS has a lot to prove. Yes it is a platform that features an impressive selection of high quality apps, and I, like many others, love key features that simply aren’t available on other phones. Android is not just catching up, it is actually overtaking iOS in many respects. With every phone contract that is about to finish, I put myself through the same hard questions of whether I should ditch Apple and iOS for the world of Android. Each time, I am finding fewer reasons to stay with an iPhone.

So I suffer, ranting today to feel maybe a little better about it all tomorrow.

So I suffer, ranting today to feel maybe a little better about it all tomorrow. Yes, I am an iPhone user and I love it, but my heart is yearning for more, the competition is on its heels and I really wonder if Apple can again become the exciting company it used to be.

The 7th Guest Returns… For a Video Series

Meeting with Yamaha Corporation of Japan – Future Development of Keyboards