Skip to content
You are here: Home > Gaming > I Interview Darren Porter – Route Creator of Bristol to Exeter for RailWorks 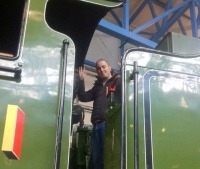 For a couple of weeks now I have had the pleasure of trying out the new Bristol to Exeter route for RailWorks and RailWorks 2. Published by Just Trains, it has an impressive 85 miles covering Bristol Temple Meads right up to Exeter St Thomas, lovingly recreated with recognisable landscapes and familiar landmarks. The route includes 14 detailed stations, eight new scenarios, detailed and accurately placed landmarks and notable buildings, fully functional animated level crossings, authentic terrain mapping and AI train operations.

I really love this route… There is something special about speeding through lush surroundings, trees as far as I can see, bridges appearing with great frequency and tracks that run closely alongside main roads and disappear again within an instant.

I asked the creator of the route Darren Porter if he would care to answer a few questions and he willingly obliged, so here they are below for you to learn a little more about the man himself and the creation process:

So can you tell us a little about your background?

Aged 30, originally from Ferryhill, County Durham but now living in Redcar, Cleveland. I am currently self-employed, route building for Just Trains, but in the past have been employed mainly in two sectors. Originally after leaving school this was both warehousing/delivery driving and then I moved into the public sector working for a recruitment agency. Immediately before I started route building full time, I also had my own CV creation business.

How did your interest in trains begin?

I cannot specifically put an age on when the interest started but it must have been young! Living in Ferryhill from birth, right next to the ECML, my father was a trackwalker for British Rail for 42 years meaning we were eligible for free travel on the network. Having no form of private transport, all of our holidays and days out were by train and the interest stemmed from there. Many happy memories were had in those days with the fondest ones being trips to both Edinburgh and London on the HST, something that has remained my favourite train. I was also fortunate enough to make many journeys in the early days using “proper” trains, not with this plastic, underfloor powered rubbish that is everywhere today!

How did this transfer to rail simulation?

Although nowadays, I can see that many got interested in simulation through titles such as Southern Belle for the Spectrum, my interest didn’t start until the release of MSTS. I cannot remember where I saw it advertised but I just knew I had to have it and managed to pick a copy up from my local store on release day, Electronics Boutique at the time I believe, for the princely sum of £49.99! At the time, I was in my element, I could finally have a realistic interpretation of my hobby in my own bedroom! Then followed the Trainz series and my first experience of that would have been Trainz 1.3 which again was outstanding in its own right for its time.

How did you first get involved with route creation?

I have dabbled in route creation from the first day I obtained MSTS and although I found the system to be quite difficult at first, it was something you got used to and I had several personal layouts. Again, once I obtained my first copy of Trainz, I dabbled immediately in the route building side of things and created a few long lost personal projects. Unfortunately, at the time, I had just moved to Redcar with my partner and we had no internet connection meaning I never actively got involved with simulation forums and the community apart from the odd visit to the public library where I would look on with jealousy at the content being created and shared. It was only really after the release of Rail Simulator and an internet connection that I took a more vested interest in what people had been creating along with the fact that the program contained the very route I had longed for, Newcastle to York.

What is the process when creating a route?

I would imagine the order in which it is done would differ for each creator but I would say we all follow the same set of guidelines. Research material is vital when creating a real route and luckily, in this day and age with the internet, we have a wide variety of resources to choose from. If the route is to be payware, the first thing is really to make sure the idea is viable because development costs can easily escalate into well beyond five figures dependent on how long the route is, how much custom content is to be created and included etc etc. The main things I swear by is to have as many photos as possible, even more so if you can actually journey the route and take them yourself. A gradient profile is equally as important and can sometimes be hard to find although there are books available if you look hard enough. Finally, a cab ride dvd is a necessity for me as ultimately, that is the view you are trying to replicate but I do find them invaluable for placement of finer detail. After that, the internet always comes in handy and a search engine can normally fill in the gaps!

Why did you choose Bristol to Exeter for your latest creation? 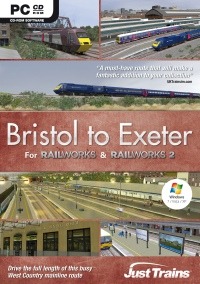 Bristol to Exeter was a route I knew about as it had sat on the Just Trains in development page for some time but I never knew where the project was in terms of completion or whether it had been stopped. On completion of Newcastle to York Modern, I was offered the chance to take a look at the route in its raw state and subsequently offered the chance to commence building it. At the time, the area was alien to me, I had never travelled down that end of the country before and was slightly sceptical I could either do a good job from so far away or even have the passion for the route. However, some gentle persuasion from the team at JT, a couple of weeks doing my own research on the history of the line, several hours watching and re-watching a cab ride DVD and the knowledge that the route would receive so much in the way of custom scenery content persuaded me to go ahead with it.

How long did it take you to create it?

Officially, my start date on the route was the beginning of January 2010, however, I actually started basic scenery placement around two weeks prior to that by travelling the route in the simulator, in conjunction with the cab ride and real world co-ordinates to place signals, AWS ramps, bridge placements and speed limits, the idea being to actually have a functional route before any main scenery was ever placed. I think I actually handed the original final build over in mid-October meaning the creation from start to finish was in the region of 9-10 months. Working on the route as self-employed, time was never an issue, however, as time progressed and I missed my own deadlines, I found myself working 14-16 hours per day, 7 days per week in order to get the project finished before the final deadline. Thankfully, I didn’t have the pressure of creating the wonderful custom objects and although I added a few smaller bits and pieces here and there using my limited modelling skills, if the assistance wasn’t there from the creators at JT, we would probably still be looking for a release next Christmas!

Why have you designed your latest route for RailWorks? 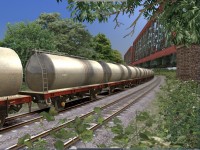 Although I have mentioned above that I have used all of the available editors in MSTS, Trainz and Rail Simulator/Railworks, the latter is the only one I have ended up being truly comfortable with. I also feel strongly in the product, feel positive about the team behind the product and do see a bright future ahead, not only for myself as a payware creator for as long as it lasts, but also to further my freeware contributions to the community, a community which I do believe is expanding daily with some excellent creators coming on board.

What are your plans for the future?

At the moment I am currently working on an un-announced route project and am in constant dialogue about future plans. As mentioned above, I also try to find time to create my own free content and want to continue this where possible. I also keep being told by my parents that it is time to get married and also, the partner keeps hinting on that we should finally take the plunge, however, I am too busy! Luckily, she is understanding.