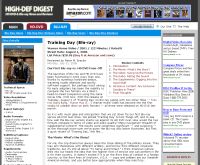 I love the DVD format as it was such a massive leap over VHS. Now we have a format war on our hands though for the next generation format to replace/succeed DVD. The HD DVD camp should be feeling very happy with themselves lately after numerous positive reports stating the format for video quality etc is actually better than Bluray currently.

Whatever its merits as a film, ‘Training Day’ has made history by becoming one of the first titles to be released on both the Blu-ray and HD DVD formats. In our first head-to-head comparison, we found the HD DVD to be superior. The unfortunate cropping of the Blu-ray image, coupled with more noticeable compression artifacts and an overall darker cast, can’t compete with the more consistently pleasing presentation of the HD DVD. Also a strike against the Blu-ray version is that both the Dolby TrueHD and Dolby Digital-Plus soundtracks have been dropped in favor of plain old Dolby Digital, and even the disc’s menu navigation is more clunky and with less interactive functionality. Certainly, this Blu-ray release delivers fine video quality in its own right, but the format’s backers will need to step it up if they are going to win the hearts and minds of early adopters over HD DVD.

A really insightful review that boosts my moral with HD DVD yet again. I will hopefully be getting the HD DVD drive for my Xbox 360, so it would be nice to see the HD DVD format do well. Last thing I want is to get the HD DVD drive add-on and then the format disappears!

Finally… Blu-ray Has A Use – Star Trek Phaser

Looks good for HD DVD. Also spotted them for sale on a few sites already and are the same price as normal dvd’s which is good.

In regards to which will last over the other, you just gotta ask yourself, has any other Sony format lasted?

Hd-Dvd should win and in relation to the last comment sony invented the 3.5 floppy disk that was quite good, Video8/Hi8/Digital8 were all quite succesfull. Oh forgot to mention sony co-developed the existing dvd that we use now with phillips! So yeah sony have never made a lasting product!:-?

Not to start a format war here, but yeah, OK so I should have said how many have really taken off.

So we have 2 formats still widely used, surprisingly Floppy Discs are still around. Also, I thought that Video8/Hi8/Digital8 tapes where all taken down by MiniDV, DVCAM, and DVCPRO tapes. I could be wrong though.

MiniDisc, Memory Stick (though unless you have a digital camera, I think it’s fair to say that all brands in this type of portable media are losing when compared to USB Flash Drives), HiFD, SACD, and UMD. And those aren’t even counting the digital formats that aren’t really widely used either.

And co-developing a DVD format doesn’t really count cause we are talking Sony only.

Didn’t Sony have involvement with the Audio CD as well though?

Also SACD is far from dead, if that were the case you could say the same about DVD Audio. The consumer just isn’t bothered with either format as its all about online downloading at the moment. I use DVD Audio though and have a few albums.

I agree sony hasn’t always come up trumps but we are not talking only sony! Blu ray isn’t only sony, its samsung and phillips not to mention all of the studios involved ( disney etc). People are seeing it as a straight fight betwwen sony and microsoft but its not the case. Lots of big companies have money tied up in this battle. I’m not taking one side or the other i will wait and see which system is best for my technical obsession! oh and by the way hi8 was the indie film makers choice from 85 and is only just being overtaken by mini dv now, and yes sony had a big involvement in the creation of cd again alongside phillips! :)>-

Why did Disney have to go to Bluray :(

When you say “a fight between Sony and Microsoft” do you mean to say that Microsoft is helping to create HD-DVD’s? I thought Microsoft was only supporting it with the HD-DVD attachment, not actually helping create the technology. You learn something everyday I guess. ;)

Microsoft was neutral at the start, but now they have thrown their support to HD DVD.