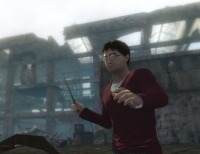 One of the key ingredients for reviewing a game is of course to spend a good few hours playing through the various modes, levels and plot twists. Although there are many individuals who would love the opportunity to take part in this sought-after industry, it is of course full of titles that you wish you could throw away after just ten minutes yet alas ploughing on through the pure stink of a terrible game.

Harry Potter and the Deathly Hallows Part 1 is such an example and now I have to spend a considerable time writing about how much I dislike the latest movie tie-in. So how can I portray to you the avid reader the sheer boredom, disinterest and disheartening gameplay this title provides in non-stop quantities? I really wish I could jump straight to the conclusion, however I will attempt to give you some of the points that make Harry Potter and the Deathly Hallows Part 1 a special title for all the wrong reasons.

In typical Harry Potter fashion, against all the odds you progress through a magical world of revelations and wizardry. There are inklings of a plot buried deep within the gameplay, but nothing that will encourage you to sit on the end of your seat in suspense. In fact the whole plot is extremely sparse of any content and only mere suggestions of what the actual movie features are subtly made apparent within the messy and uninteresting cut-scenes.

Unlike many previous games in the Harry Potter series, exploration is almost forgotten about with only the odd chest hiding around a corner encouraging any kind of deviation from the set path laid out by the developers. The whole game is extremely linear highlighted even more by the odd level selection screen, that gives the player a few options of what order to proceed, although it makes absolutely no difference to the outcome of the game itself.

It’s all about casting and deflecting spells. Spells are collected as you plod along uninspired every now and then. Eventually and painfully you amass quite a collection, some more useful than others. A particular spell may be to get past a set of ridiculously small objects that amazingly have halted your progression or are meant for pure attacking purposes only. Although certain ones will prove useful in particular circumstances, you will nevertheless find your favourite and stick with it for most of the game. You will also hide from time to time using your magic cloak, in which you need to navigate the roaming individuals who are on the look out for poor Harry.

You remember when I mentioned the pure boredom of this title? Well here is where it really takes a dive into the bottom of the barrel of mediocrity. Graphically speaking Harry Potter and the Deathly Hallows Part 1 certainly isn’t a pig, although on closer inspection the lack of detail is quite shocking. This is made even worse as fairly frequently you will find yourself revisiting the same location over and over again. Up and down, left and right and oh no back we go again just to thwart yet another appearing wave of evil doers. You are then further punished by the sheer tedium of taking on the same predictable enemies over and over and yes… OVER again.

A break will finally come along in form of a cut-scene, however your patience that is by now rapidly running out is only tested yet again by the lack of plot details. Even the actors that are providing the voice over work sound completely and utterly bored and would surely be happier doing anything but this.

Thankfully there is no online co-operative to this game as why on earth would you want to drag a friend into this world of utter repetitiveness?

I am trying hard now to think of one redeeming virtue that Harry Potter and the Deathly Hallows Part 1 may contain that could alleviate in even the slightest the terrible gameplay of this title… Sorry I will have to get back to you on that one!

There are poor games and there are the terrible – Harry Potter and the Deathly Hallows Part 1 falls into the latter category with added gumption. Movie tie-ins are often ridiculed for their obvious cashing-in value, but this game really does take the biscuit. Even with over twenty years experience of video games to fall back on, I am still shocked that such a title could be released in this day and age on such a ridiculously popular franchise and fail in such spectacular fashion. There is even less excuse due to the fact that there have been worthy purchases within the Harry Potter game series, yet even if you are a fan of the once boy wizard and his fellow wand wavers, Harry Potter and the Deathly Hallows Part 1 is definitely and unequivocally one to miss out on if you wish to be left with any sanity at all!

Enemy Down – Branching Out into Console Gaming Leagues