Skip to content
You are here: Home > Media > Hardwick Hall of the National Trust – Late 15th Century Property Owned by Bess of Hardwick 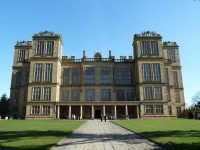 The property is absolutely stunning both from the outside of this late 15th century hall and within due to the lavish tapestries that still retain a surprising amount of detail and colour considering their age.

It was the formidable Bess of Hardwick who first created Hardwick in the late 1500s. In the centuries since then her descendants, farmers, gardeners, builders, decorators, embroiders and craftsmen of all kinds have contributed and made Hardwick their creation.

It’s also now possible to capture photographs within the building (as long as you turn your flash off), allowing you to snap pictures of some of the fascinating rooms that fill Hardwick Hall. There is also the older building that now sits as ruins close by, that although lacking the interior splendour of its newer counterpart – manages to surprise with glimpses of the once proud statement it once bestowed.