Having played and loved (just like Bill Gates apparently) the original Fuzion Frenzy, the only thing that let it down was the lack of online multiplayer.

At this point Xbox Live was nothing more than a dream, but now the sequel has arrived on the Xbox 360, we can enjoy multiplayer action with people from around the world and not just our living room.

With a mass of mini games that are played through a tournament for long gaming sessions, or just by selecting a few for a quicker romp, Fuzion Frenzy 2 has a very good selection to choose from. Graphically much improved, but don’t expect anything overly impressive obviously for a game that is nearly half the retail price of others. 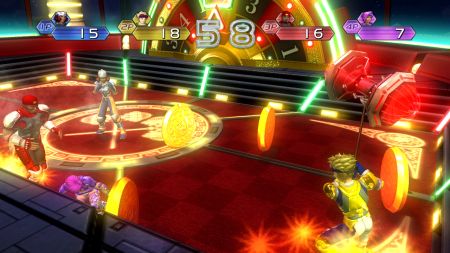 Whether you like clobbering people, collecting items, riding vehicles or quick action, Fuzion Frenzy 2 seems to have it all for those wanting a change from the normal games available on the Xbox 360. I would have liked to have seen more of the mini games from the original come to the Xbox 360 version, but there is plenty to get your teeth into.

An entertaining single player experience, but if you can get your online chums to purchase this title as well, expect a humorous exchange of banter as you delight in the madness that is Fuzion Frenzy 2.