Full Throttle turned out to be quite an expensive acquisition as I had to upgrade my computer’s memory from 4MB to 8MB to enjoy the experience. By the time I had this necessity installed and purchased the actual game, I had spent around £100, so by this point I was just a little bit nervous of whether I was doing the right thing. Thankfully I discovered one of the best point and click adventures to be released by Lucas Arts.

Released on the PC CD-ROM in 1995, Full Throttle had a huge impact on me with its glorious video segments, riveting storyline and superb voice acting including Mark Hamill (Luke Skywalker from Star Wars) and Maurice LaMarche, who also voiced Futurama’s Kif Kroker and The Brain in Pinky and The Brain. You are in control of Ben (last name never revealed), who is the leader of the Polecats, a biker gang that certainly has higher morals and respect compared to rivals in the area that include the more aggressive Rottwheelers. After a stunning video introduction with music by The Gone Jackals, Ben rides over a limousine with an elderly gentleman inside, Malcolm Corley the owner of Corley Motors, who is the last motorcycle manufacturer in the country. Set in the future, all vehicles are now moving to hovercraft variations, giving bikes a very uncertain future.

The Polecats stop off at the Kick Stand Bar, a place for friendly arm wrestling and of course drinking. Malcolm Corley catches up with them and pops in, however after a short while both Ben and Malcolm begin to reminisce about old times in the biking world. Malcolm Corley was far from alone in his limo as Adrian Ripburger, the games evil scheming Vice President of Corley Motors appears in the doorway offering the Polecats employment to act as an escort for a shareholders meeting. As Adrian Ripburger and Ben step outside for a private discussion, it becomes clear that Ben has little interest in the role offered. Also stepping out of the car are Nestor and Bolus, Ripburger’s henchmen, who sneak up behind Ben and smash a plank of wood over his exposed head, knocking him unconscious to the ground. The Polecats are fooled into believing Ben has ridden off to scout out a route for the escort resulting in the entire gang disappearing into the distance, when in actual fact Ben has been stuffed into a garbage bin. It is not long before Ben gains conciousness and you are now in control of the on-screen action. 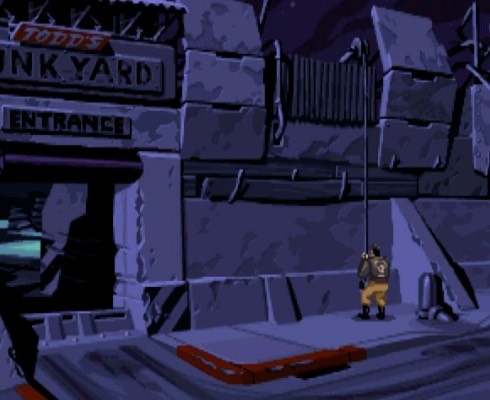 His first task is to locate his now missing keys for his motorbike, which the barman is holding. Ben has no patience for time wasters and tackles the situation in typical Ben fashion, which is by grabbing the large ring on the barmans nose and thrusting his entire face into the bar. The bartender is unsurprisingly far more co-operative now and gives Ben his keys. 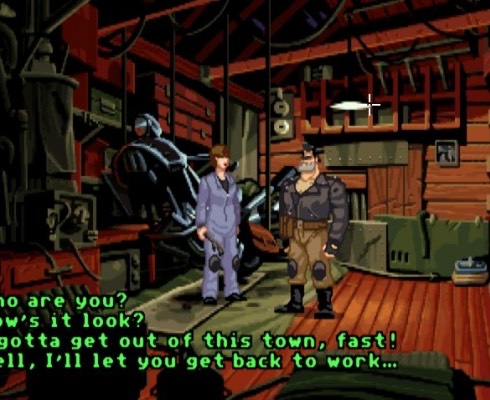 Essentially Full Throttle is a story about the struggle for control of Corley Motors and Adrian Ripburger will do anything including getting blood on his own hands by murdering the current CEO of the company Malcolm Corley for the privilege. Ben, the Polecats and an assortment of characters you meet along the way including Maureen (better known as Mo) who assists Ben in fixing his now wrecked bike, The Vultures another biker gang who have a few surprises to share along the way and other larger than life misfits, offer a path for Ben to rescue his biker gang and save Corley Motors from Hovercraft van vehicle hell.

Unlike many older point and click adventures, Full Throttle dispensed with the usual text labels that filled a decent proportion of the screen and instead holding the left mouse button over interactive objects and individuals revealed a very clever graphic, allowing you to look at, talk to, grab and even kick your way out of any trouble. Right clicking reveals the inventory. Not only does this allow the screen to be totally dominated by atmospheric locations, but it also feels far more intuitive and satisfying to use.

Along the way you will also take control of Ben on his bike, punching and kicking your way through the rival gang members that appear on your route to saving the day. By moving your mouse to the left or right, you tilt your bike in the same direction, frantically clicking away at the mouse to attack your foe. They may even be carrying weapons such as a nasty chain, which you can steal away from their own mits and use yourself in a bid to win the grudge match. 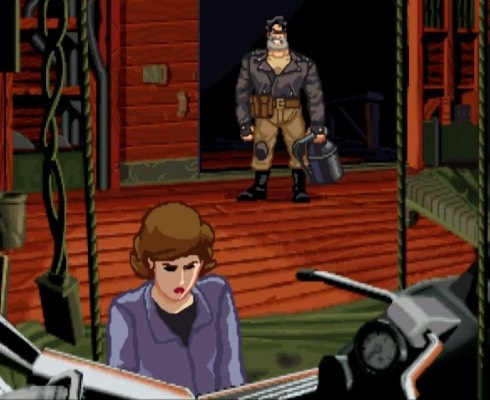 Ben’s no nonsense attitude and rugged exterior is certainly a departure from the typical innocent and naive hero we usually warm to. Nevertheless, even with gruesome murders, a sinister plot, corruption at the highest levels and the smell of asphalt, Full Throttle manages to steer your affections towards Ben and his leather wearing counterparts.

Full Throttle may not be the longest point and click adventure to exist in the genre, however it is one of the more grittier and visually stunning games available from the era. Not only can you delight in the high quality full screen video, the darker themes set by the plot and the stylish cartoon like on-screen dynamics, but you can experience one of the best titles to ever grace the PC platform.

Full Throttle is completely playable using the ScummVM software, although you will have to more than likely run a search or two on eBay to find any copies to buy.

Used to work at LucasArts… those were the days.

I was the pre/post production Art Manager for a few years… just before it blew up. Wasn't there in their heyday though… Republic Commando, Episode III, KOTOR etc. around 2002 – 2004.

Must have been interesting though, so where do your talents take you now? Anything gaming related?

Freelance Illustrator/Concept Designer/Designer for Film, TV, Web and Game projects. Game projects are mostly online but I did do some EA work for their FIFA series.

This is very strange, I was just talking to someone about this only yesterday – I was watching someone play discworld and it reminded me of this, but I couldn't think of the name……

Out of all the games you've leant to me over the years, I remember this being one of those rare games I enjoyed.

Did I loan you a lot of rubbish over the years as well then :D

[…] written a couple of pieces on classic point and click adventures including Simon the Sorcerer and Full Throttle. I plan to stick with this genre for a while as it remains my favourite even today and with the […]