I have been a FIFA fan since the very first game appeared on the SEGA Megadrive (Genesis) all those years ago. I was very impressed with FIFA 06 on Xbox 1, however FIFA Road to the World Cup which appeared on the next generation console the Xbox 360, was just nothing more than a nice graphical game with very little gameplay.

However after playing my first match on the latest FIFA, you would not recognise it compared to the very average game that came before it. 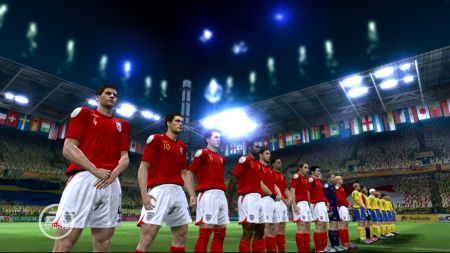 First off they have gone all out with the presentation, giving the game a fantastic atmosphere, as you would hope with the World Cup license they have. More importantly though, the gameplay is faster, smoother and more importantly, far more fun and interesting!

Shooting has been tweaked quite considerably, dribbling feels far more reliable and the whole thing just sits very nicely now as a solid football game. Put away the horrors of the first FIFA attempt on Xbox 360, and give this latest installment a go. You will be surprised how much has changed.

I cannot wait for this! its being picked at ameplay.com now! so i should have it 2moz!!

But will the fifa games ever be as good as pro evo? Pro evo 5 is the best football game of all time! Having said that i need next gen footy and i’m sure i will give this a try, I just hope its not a 5 minute wonder like every fifa game since fifa 96! :-w oh forgot to ask have you played it online yet as it might be the feature that sells it too me on-line footy is paramount!! \:d/

Excellent at this rate we’re gonna have at least 10 Fifa games a year. 2 for the World Cup (what a joke) Then EA could do leagues like Englsh,French,Italian,German,Spanish, etc……Why stop there then they could do all the Cups just to get even more money out of us…….My advise save yourself a load of cash and wait for the best football game around PRO EVO….out around october and worth the wait. Improved graphics and gameplay….Hahahaha Good joke.
P.S Players look like they have been Mr Sheened and the same animation for every foul and booking…..Roll on October

Rubbing: Have yet to try it online, but so far so good, really enjoying it so far.

Skil: The players don’t look half as glossy as before, I think EA have taken note of that particular critique but still not perfect, . I do see why everyone likes Pro Evo over FIFA, however until we see one made for Xbox 360, this latest FIFA is looking good.

I got mine for the bargin price of 99p ( this however included trade in of 3 games, 1 360, 1 psp, 1 pc! ) so i have joined the mass fifa ranks!. This doesn’t mean I have fallen out of love with pro evo but i needed hd football!! Let the on-line arguments commence! :-“

I can see the arguments we will be having Rubbing already :) but it is all in good fun :d