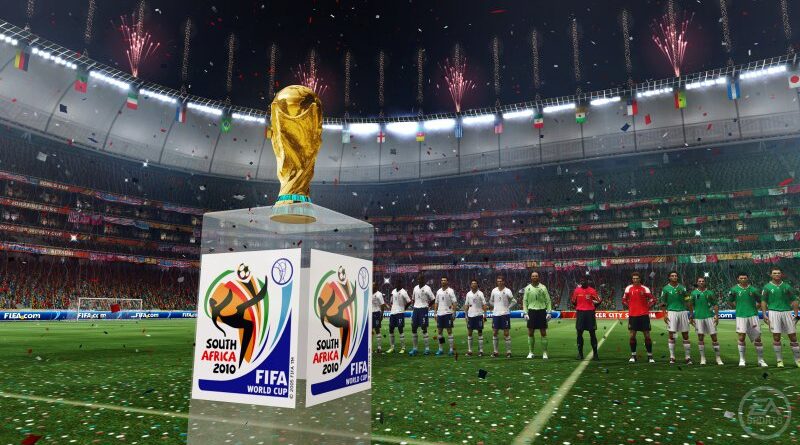 Every four years, our hearts are constantly broken as each time we dare to sit down to watch the latest and possibly greatest sporting event to appear on our televisions. We raise our expectations oh so high and far from learning our lesson from previous tournaments, we repeat our silly footballing traditions by standing up every time when we think our team have scored, shouting at the manager’s poor choice of substitution and wondering how on earth the goal keeper saved that magnificent shot, denying your team victory.

We are creatures of habit after all and it would appear EA Sports are no different as they release yet another football title covering a major event. FIFA World Cup 2010 South Africa may be considered a short diversion in between the typical yearly FIFA releases, but it isn’t quite as simple a decision as you may think.

FIFA 10 owners will notice very little change in terms of gameplay. Passing, throwing, crossing, tackling and shooting remain pretty much untouched except for a few minor tweaks here and there. You will notice a few more animations and a slight adjustment elsewhere, but actually FIFA 10 had it pretty much nailed anyway and these tournament releases often stay very close to their yearly counter-parts.

The clincher though for considering FIFA World Cup 2010 is not so much the gameplay, actually it is the overall presentation. You can’t beat stadiums full of fans dressed up in silly hats sporting their team colours among a deluge of excitement and confetti. If you were ever looking for a tug into the wonders of the World Cup, well this title has it all and it is absolutely plastered with atmosphere, oozing from the size of the stadiums, the roar of the crowds and the hype surrounding the event. It is impossible not to be caught up in it all.

Usually I find myself only glancing over the single player modes in World Cup based games as they more often than not feature very few enticements, which is why a lot of people will prefer a rental. At least here though you will be pretty satisfied with the selection on offer. By pressing the ‘Start’ button you can jump straight into a game with little fuss, however you will want the full experience by selecting the ‘2010 FIFA World Cup’ option. 199 national teams are available obviously from all over the world, but only if you decide to head right back in the calendar playing all the far earlier qualification matches. If your team did make it into the finals though, you can jump straight past this section and hopefully into the knock-out stages.

‘Captain your Country’ will give you the opportunity to take control of an individual player on the pitch and prove your worth to the onlooking manager. Will you create your own player customising the look, weight, height and attire or select a well known footballer instead? If you have already created a ‘Game Face’ on the EA Sports website, you can even download this to the game so you can see your wonderful facial features applied to your character.

During a match your successful plays will give you an increased overall rating which are shown permanently on the screen. If you complete a pass, stay in position or score a goal, you will notice your section turn green and your rating rise from the ashes. You can just as easily lose these vital improvements though if you start to be a little sloppy, letting the opposition nab the ball right from under your nose. If you manage to continually impress the decision makers, you will eventually captain your country, but you have a lot to prove before you get to this stage.

It can be a little lonely wandering around the pitch, chasing the action while trying to remain in position, but you can encourage your team mates to pass to you if you hit the appropriate button when you don’t have the ball. The computer will then at least attempt to bring you into the manoeuvre, but do make sure you are in space first unless you want the pass easily intercepted by your opponents.

‘Story of Qualifying’ is a set of scenarios emulating World Cup matches, where you may find yourself jumping in at a certain point in the game a few goals down with various national teams. There will be a clear set of objectives to complete ranging from simply winning the game to scoring more than a few goals. What really makes this area exciting though is the currently locked section that will only open during the real-life World Cup tournament. Why relive past events when you can enjoy changing the fate of a real match that happened only days ago.

OK so the single player selections although interesting aren’t as in depth as FIFA 10, however online there is a couple of modes that may just swing it for you…

The appropriately named ‘Online FIFAWorldCup’ has you progressing through the finals again, but rather than playing the computer, you actually confront real people participating in the online gaming masses. If you can reach and then win the World Cup by competing against the often more masterful opponents here, you are doing very well indeed. Secondly you can compete in ranked head to head matches, where you start in a very low division, slowly progressing to the higher levels tracking your results every step of the way.

Both these modes offer a lot more incentive to play online and congratulations to the developers for embracing it the way they have. It doesn’t stop there though as your matches online will also earn points for your country. On the main menu you will notice the top three country ranks and you yourself can make a difference by winning games and elevating your entire nation up the leaderboard. You can’t get much more patriotic than that or worse feel the huge burden of a defeat knowing it affects so much.

The main change in the gameplay is the way you tackle the penalties and we all know how stressful those can be. A gauge appears on the screen and by pressing and holding the shoot button when the moving marker rests in the center, you give your player the best chance of shooting where you are aiming. It is not over yet though, as you also need to release in a precise manner to apply the amount of power. By adding a little direction with the left analogue stick, you have your new penalty shootout controls mastered, with a fair bit of practise. You can even add a little intentional hesitation in a bid to unnerve the goal keeper, but this also takes a bit of work. When the roles are reversed and it is your turn to be the goal keeper, you use both the left and right analogue sticks to move and dive. You can wait for the ball to be hit before making a decision, but as ever a lot of it is left to your instincts.

As far as presentation goes, FIFA World Cup 2010 is the business, with amazing representations of the newly built stadiums, instantly recognisable players that represent their real-life counterparts with ease and even the managers are there in all their stressed and cross-armed antics. The crowd chants are sublime and even the commentary seems to have stepped up a gear to match the magnificent graphics. The celebrations are certainly wild and I would love to see any football player attempt the moonwalk.

It isn’t a totally perfect story of course. Online matches show far too many cut-scenes, connecting to an online game can be a little bothersome with connection issues and the computer’s decision making skills of whom it thinks you are passing to are just bizarre.

It may be only a slight improvement over FIFA 10, however it is hard to ignore the magic that an event like the World Cup can bring to the title. You will feel all giddy with patriotism when you take your countries national team into historic battle, waving your flag and possibly shouting abuse at your virtual players. None of that matters though as FIFA World Cup 2010 South Africa strives to push your dedication to its maximum and succeeds where other games have fallen short of the crowning achievement. If you, like many football fans around the world love to be encapsulated with World Cup fever, then look no further as this title shines in every department.

FIFA 11 may be only months away from appearing on store shelves, but can you really put off the chance to show the world your football skills and play for your country? Tough decision isn’t it!

Great review as ever James, however your fascination with Emily Heskey is a little creepy! He appeared so many times throughout the video. :)

I can't help he is the default striker for England now can I ;)

In addition, I feel chipping the goalkeeper was a lot harder in this game

Played the demo and felt it was a beta for FIFA 11!