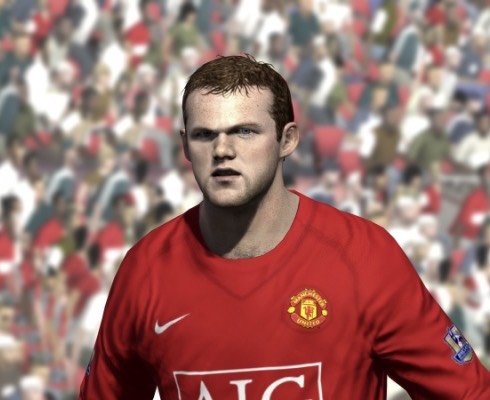 It is time to welcome a new champion to the field. For years, FIFA has been mocked as the pretty boy who lacks the depth and reality that the more graphically simplistic Pro Evolution Soccer boasted. This battle was as fierce between its fans as the match loyalties the titles intended to simulate. We may however have seen an important battle cry echoing through the excitable crowded stadiums as FIFA firmly takes its place in the opponents half, parading its virtues.

The last installment refined a physics engine, pushing the authenticity of football. FIFA 09 however has trounced last year’s effort and taken a new direction. Everything reacts, flows and excites like never before. The ball literally has a life of its own and this is shown even more now the referee has returned to the pitch. Yes, the ball will hit the official from time to time causing chaos, but it is when a few players are close together and the ball pings around off shoulders, chests, heads and knees that you can really revel in. It adds a whole new randomness, where predictability once disappointingly stood. You find yourself chasing down every ball in the hope that something special may develop and just like the real game it tries to emulate, FIFA 09 surprises while never leaving the realism it embodies. 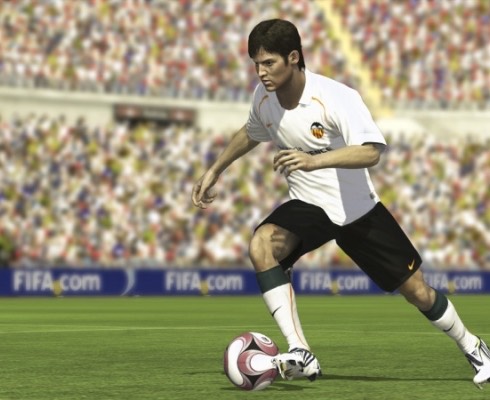 Gone are the days though where passing felt extremely over-accurate. You have to now gauge how hard you wish to pass the ball and define in which direction far more carefully to achieve the desired action. It may make life a little harder, however the effect is far more pleasing. Watching your team mates pointing ahead of themselves when you control the ball indicating they are running into space is just simply delightful and opens up the game to new possibilities. You actually feel you like you have a connection with the Artificial Intelligence (A.I.), which has taken a lot of the frustration out.

I have never heard so many Pro Evolution Soccer fans mention the positives of any FIFA game like this latest effort. Any FIFA fan will know this is quite an achievement; however Pro Evolution Soccer fan boys will also have to prepare themselves for a possible change of opinion as well. It may be considered an evolutionary step forward, but it feels more momentous than previous generations.

As per usual, it is all about the league and Manager Mode remains. Not much has changed, however with a new feature known as Adidas Live Season, allowing you to download league information on a weekly basis that will acknowledge player improvements or disappointments. If the real Wayne Rooney is having a cracking performance that will be reflected in the download and will adjust the players attributes accordingly to reflect this. There are a number of leagues that have this option and the first one is free, however if you want to add another, expect to use a few Microsoft points.

A new option is ‘Be A Pro: Seasons’. Here you can control a single player through a career either one from your own vivid imagination or one of the professionals. As you would expect with ‘Be A Pro’, points are awarded for your positioning, passing and other skilful characteristics. 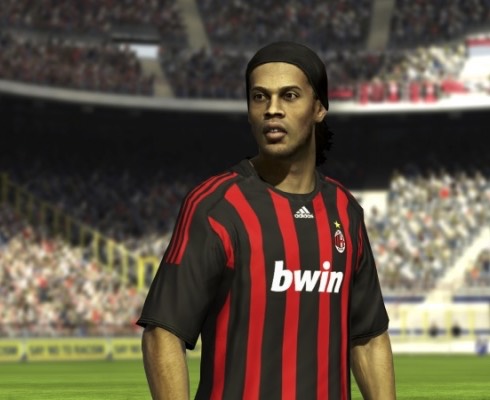 For those who crave complete control will no doubt enjoy embellishing the tactics system. As we all know, you can already trigger offside traps and the style of play be it attacking, defensive, balanced etc, but now you can really go that extra mile and customise to your preference. It certainly takes the simulation a step further, but some will be pleased to know it’s not a necessity to fiddle with this section, but it can improve your team’s winning potential.

The offline experience doesn’t end there as FIFA still has the featured game modes from titles gone by, but it is time to move on to the next sensation.

FIFA 09 excels in its online functionality and although this has been one of its strongest points for a few years now, the developers have certainly not been complacent and pushed ever forward to something that could only be dreamed about when we received our next generation consoles.

20 player online is usually reserved for first person shooters and even then you console yourself to the fact that a touch of lag will no doubt creep in at some point and spoil the encounter. Somehow EA Sports has succeeded in not only bringing this dream to our high definition screens, but has also enabled an online spectacle and has to be seen to be believed. When a lobby is full to the brim with eager footy fans, everyone can select a position or rely on whatever is left (except for the goalkeeper, which remains controlled by the artificial intelligence) and just a few moments later thrusted into the arena. Lag will always be an issue no matter how much we despise it, however considering the work load that must be accumulated with so many players and voice communications, you have to step back a moment to admire the achievement. 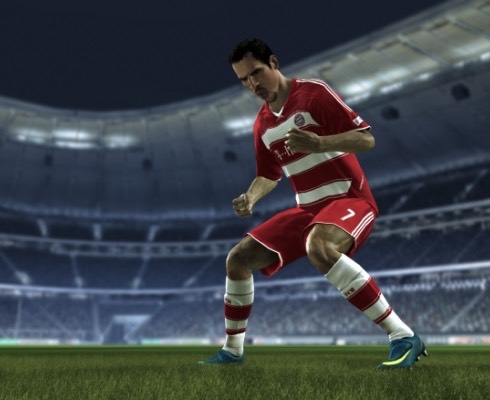 Keeping in position is vital and Xbox Live’s now crucial headset allows for important team communication. You may experience a few jibes, but the overall sensation includes instructions which may include passing requests and gasps of respect as you fling the ball into the goal. Of course, you can still have a much smaller game with only a few players on each side if you wish, however the 20 player mode certainly impresses and will never be ignored.

For those though who took advantage of the anonymous nature of the voice communications will now no longer hide in the shadows as their Gamertags will be highlighted. Phew!

The online fun doesn’t end there either. Create your own team and invite your friends to join you and take on other teams in pursuit of online glory. It is basically a football clan system, that just so happens to work fantastically. The only down side is that you can only be a part of a single team, so your loyalties to your friends will be sorely tested.

It is not all good news though.

The curse of UEFA EURO 2008 lingers on with a couple of annoyances. The custom celebrations that featured remain and although fun for a while, soon get tiresome (but not everyone may agree with me on this one). The camera also still insists in sitting in a different post code on corner kicks. I didn’t like it then and I hate it now. 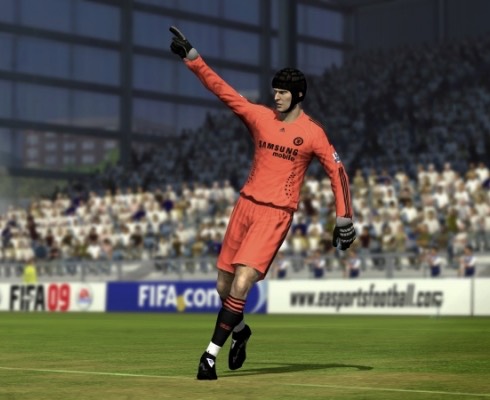 The pitch, the shadows and the atmosphere have indeed improved, however graphics haven’t really advanced as much as the gameplay or the online functionality, but FIFA is still a stunning on screen romance.

There is no doubt that FIFA 09 is the best looking football game to ever exist though. Players look amazing and now with a plethora of animations to tie everything together, the whole football match takes on a whole new meaning. Whether you are passing, diving, crossing, kicking, blocking or worse being tackled and landing right on your noggin, the animation system just oozes fluidity.

As per usual, FIFA delights in surround sound crowd enthusiasm that can’t be matched, commentary that although suffers from the usual repetitiveness and painful mistakes, still offers a television like auditory experience.

The now definite thuds as you lash out on the air filled circular leather object heighten your aspirations to perfect the perfect cross, pass or through-ball.

With such an immense offline and online offering, it is hard to see how you could ever become bored. 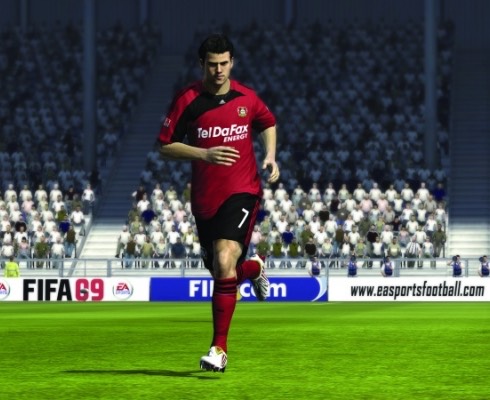 As long as you have Xbox Live, your chums will follow you into the stadiums of hell and back and together, gameplay becomes more than just a routine, but a real thrill.

Achievements are far better spread out than in previous games and now rewards for fancy goal scoring including diving headers, bicycle kicks and others.

For a change though, it is not going to be one of the games you trade in unless you are a real achievement whore. Instead, take pleasure from the fact that you are only really likely to trade in the game when FIFA 10 is only a month or so away. 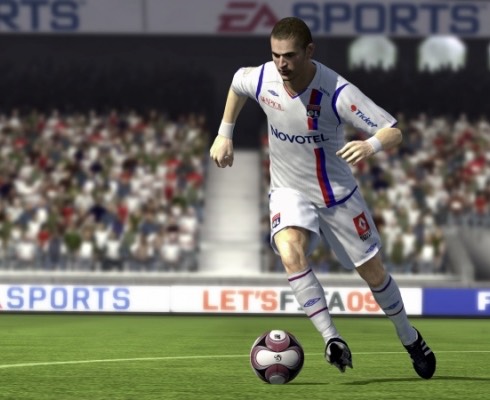 There was once a time, not very long ago, where Pro Evolution Soccer fans could no more than whisper their positive notions regarding their titles fiendish competitor. Now a new confidence has emerged where the murmurs become heartfelt compliments surrounded by feelings of joy and envy.

FIFA 09 has taken a bold step that somehow manages to convince many of its staunch opponents of its advancements while honouring gamers like myself who have followed the series since its inception.

If you are desperately seeking football pursuits both offline and online, FIFA 09 ticks all the right boxes. No longer is FIFA considered an exclusively glossy presentational tour-de-force, but can also relish in a flowing sensation that will be incredibly hard to contest.