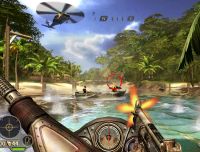 I loved Far Cry on the original Microsoft Xbox, but the Xbox 360 version felt a very poor next generation version seeming to rely on people having never purchased the original Xbox (1) version rather than adding yet more graphical splendour (although the water does look very nice).

One major flaw that stood out to any online player was the atrocious lag in which even the voice communications were affected. You could sit in a game of just a few people and then all of a sudden the breaking up began. I find Xbox Live a social event as much as a gaming one, so this became very tiresome.

Thankfully we now have a patch, which was released a couple of weeks ago that has improved the online gameplay greatly. The only problem I am finding now is that the friends who had purchased the title originally have all now traded it in or sold it, so I am left with a now much better game with no one to share the fun with! Luckily for me the Fragdolls still have a game or two every now and then (thanks Kitt) and that provides the much needed online entertainment for the Far Cry Instincts Predator game. It was quite funny though that with the patch, many of us played a very quiet game hardly speaking at all, oh to the pressures of online gaming and the expectation of our peers.

If you are going to release a next generation remake of a highly regarded Xbox (1) game, you must… MUST make sure that the faithful fans who spent hours making maps on the original are rewarded with yet another stunner of a title to follow on. Unfortunately it is sadly lacking and even with the patch is now past its prime due to the original technical issues with online play. An opportunity missed for both the developers and the gamers as this game sits almost forgotten completely now!

Call of Duty 2 almost suffered the same fate with its lag ridden online play, but with a very good patch and excellent downloadable content in the way of additional maps, it has survived.

I Interview Major Nelson in 360Zine

With Call Of Duty now, the second hand copies are still really expensive, so if like my brother you got rid of it due to the online not working, it’s too much to get it back. If only they got it right the first time!