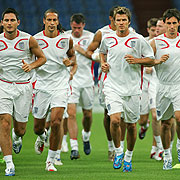 The England team have certainly had a slow start to the FIFA World Cup in Germany. Although of course the main thing is we have reached the quarter-final, I for one am still waiting for that classic game where England really shine rather than limping over the finish line. I know England are capable of far more than they have shown us all so far and maybe the Portugal game will be the one.

I think most of us understand the situation with the England team now though… We only really show our metal when we are up against a really strong opposition. Unfortunately (or maybe fortunately you decide?) we have only had one team that could really be considered a good opposition, and that was Sweden. The main problem with the Sweden game is the mentality the English team went in with. We were already through to the knock out stages by this point, so the emphasis of a victory was diminished.

All English hopes now rest on today’s game with Portugal this afternoon. Although I am not very confident in the English football team at the moment, I still believe they can dazzle us all with a convincing victory. Let’s just hope they can live up to the expectations of most of the England fans!

Well we will have to see this afternoon won’t we.