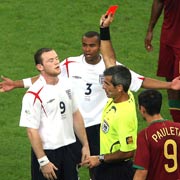 A great performance is measured in many ways, however although the game was nail biting and scrappy, you have to applaud the England football team for their gut determination and strength as poor Wayne Rooney was scandalously sent off in the second half dramatically affecting the game.

Wayne Rooney has always been a player who uses his immense body strength to fight for nearly every ball and this was starkly apparent as he tangled with three Portugal players. Unfortunately for Rooney, in this process he accidentally stepped onto one of the Portugal players in a rather sensitive area. What really annoyed me though was Cristiano Ronaldo approaching the referee in the way he did to influence a punishment for Manchester United team mate Wayne Rooney, for the accidental mishap. Regardless of being down to just 10 men, England powered on with tons of passion as they battled on actually opening up more chances on goal than before, which is to their credit.

Forcing the game to extra time and then those horrible penalty shoot-outs, which any England fan loathes (we don’t have the best track record!). First off Frank Lampard, who has had a very difficult World Cup, didn’t score with his attempt with a save from the goal keeper. However a few kicks later on, Portugal made some very nervous shots and didn’t score all their attempts either. By this point I had trouble sitting down and found myself pacing the room looking for some comfort. The result was of course that England were eventually knocked out of the World Cup yet again on a penalty shoot out.

Whatever you may think about formations, skills, tactics and all the other considerations that a manager and players undertake, in my eyes at least and hopefully many other England fans, will be that of immense pride, that even when the odds were stacked up against them, they held their heads high and gave a heroic performance to try and salvage something from the situation.

fifa always do this, they always put us with a ref that we have defeated in this case argentina or where the ref in the past has sent off england players

I think the ref went overboard with the Rooney red card, however you could look at almost every official and find past history I am sure :)

heya
Personally, I am a fan of Frank Lampard and considering how well he plays for his club (Chelsea) his world cup peformance does not affect his standard as a player. Naturally, he is second best in the world and you do not get that for nothing. His problem in the world cup was lacking in confidence- it just did not go his way. he had a number of chances- but Lampard likes to shoot from midfield and so sometimes he is not successful. In the game against Portugal he defended exceptionally well and had a good chance- but again it did not go in :(. He did not score his penalty- which wa a setback for the midfielder as he has an outstanding record for scoring penalties. I still have lots of faith and just bacause he did not have such a good world cup people should not think any less of him. He is still international standard, and a great player for Chelsea. One of the best players for England and maybe the best for Chelsea. He will continue to do well and succeed.

Yeah I really rate him as a player, but in the World Cup he really struggled to perform which was a great shame for the team.