Skip to content
You are here: Home > Platforms > Microsoft > Xbox 360 > Dead Space 2 Review for Xbox 360 – Only the Extraordinarily Brave Turn Off the Lights! 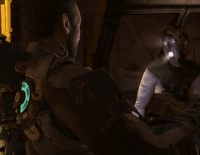 The terrifying sequel to one of the most immersive gaming experiences you will ever find on a gaming console is here to relieve you of your constipation woes. The survival horror title Dead Space 2 which is provided on two disks, continues the action packed plot with character Isaac Clarke and those creatures that lurk in your darkest of nightmares, the Necromorphs.

As before, your task is to rid the world of the creepy, scary and darn right bed wetting inducing creatures that plague a space station – with a little interruption now and then provided by Isaac’s dead girlfriend. The story propels you into a steady flow of dangerous scenarios, where your abilities to target the foul creatures that haunt your every waking moment are tested to the limit. For those who have yet to step into the Dead Space universe, the best way of defeating the ugly Necromorphs is to shoot off their limbs, head and any other dangling body part you happen to spot. Areas that glow yellow will also reveal weak points that can be shot, however aim with caution as there are those that have explosive results.

Weapons consist of the usual suspects, but with a mining twist. Your standard armoury includes the trusty plasma cutter, which can be rotated to better position your firing potential. Other destructive items include flame throwers, javelin-like spears and all manner of twisted yet fun weaponry that can be purchased as you progress through the game.

Credits (currency) are found dotted throughout the levels and stopping by one of the shop kiosks will soon diminish your grand total. Weapons, ammo and health can be purchased to help ease your frustrations, however choose wisely as the amount of cash that is laying around among the corpses and carnage isn’t exactly in an abundance. Nodes are also collectable, but these will be a little trickier to find as these will power up your personal suit and weaponry – improving damage, reload rates and so on. Isaac enjoys defensive assistance by wearing a rather trendy and wonderfully designed protective suit, that is just as impressive as that worn by Xbox legend – Master Chief. The third-person perspective also allows for full appreciation of his apparatus and weaponry capabilities – not to mention a little warning of any creatures creeping up from behind you.

Previous players will feel perfectly at home with both the controls and the environmental challenges that await.

Due to our first experiences with the original Dead Space, much of the game although terrific, doesn’t exactly seem to push very hard to ramp up the gameplay style. Previous players will feel perfectly at home with both the controls and the environmental challenges that await. There are a few additions to the Necromorph line-up, appearing with the same regularity and situated in the most obvious of spaces. An open vent or dark corner are perfect stalking spots for the dark and sinister creatures that lurk around the space station, but after a while you will earn yourself a little understanding of the game’s attempt to shock you at every turn. That being said, Dead Space 2 is still an experience you wish to undertake as the overall atmosphere and haunting effects perfectly match the mood that is required for such a title. Graphically speaking, this sequel looks very impressive featuring lighting effects that you can literally die for if you take too long admiring them. Flickering and ambient lighting, sinister shadows and the addition of the dazzling dispersal of blood litter the path ahead.

The vast majority of time will be spent exploring the surroundings, either by creeping carefully in an attempt to avoid any hidden surprises or to run like the clappers away from the visible nasties appearing from every gap in the wall. The lack of gravity or air can also add a little more challenge, providing a little variety to the standard gameplay as you float and thrust to manoeuvre yourself to complete the objectives. Add to that the inclusion of stasis modules that when fired either slow down your enemies or decrease the speed of fast moving parts that could slice you to shreds at their typical rate. Kinetic energy can also be used to move panels and machinery out of the way as well as throwing debris at the oncoming onslaught. Stomping on fallen enemies although pretty gruesome, is a necessity that will also reveal treats that you can store in your inventory.

The plot is a simple one and although the characters look far more detailed this time around, you don’t really feel any great loss if any one of them happens to meet a grisly end right in front of your eyes and trust me this happens more often than not. There are occasions when a short cut-scene will appear that fills you in on the current disaster looming with a little detail on how to sidestep the latest horror, yet it does so in a manner that doesn’t upset the momentum. Within moments, off you go again to traverse another set of corridors and vast open rooms.

Dead Space 2 is a title that insists you to turn off the lights, whack up the sound and grab your comfort blanket…

The Dead Space 2 plot is extremely linear, so don’t expect a great deal of variety along the way – however it has allowed the developers to carefully craft the experience around you to increase the tension and add a few decent yet fairly simple puzzles for good measure. Isaac must survive the constant onslaught of the Necromorphs, but not without watching yourself expire numerous times with extremely gory results. They will grab you, poke you, tear you, rip you and then of course the boss fights add the icing on the now blood layered cake (trust me it’s not jam!).

A multiplayer component is now featured along with the game (which requires the new Online Pass system, so be careful if you purchase pre-owned) that alas feels a little empty compared to the main single player experience. Taking either the side of the humans (Sprawl Security Officers) who strive to complete a few minor objectives which varies dependent on the level selected or the Necromorphs, who need to do everything in their power to prevent this from happening. Taking control of the small selection of Necromorphs on offer is a surreal feeling as they are a little ropey compared to their human counterparts. That being said, there is enjoyment to be had although nothing overly special. I am tempted to suggest a single player co-operative mode would be a wise addition, however Dead Space 2 may be one of those games where the atmosphere and dread would be greatly diminished if it was shared in such a way.

An epic sequel that continues the legacy of the original by upping the graphical fidelity, the wonderful audio immersion and the number of occasions you will fill your pants in sheer terror. The formula is a little repetitive and at times far too predictable, but for the most part you will be totally captivated by the on-screen action and the fear of what awaits.

Dead Space 2 is a title that insists you to turn off the lights, whack up the sound and grab your comfort blanket as you walk the creepy infested corridors with gore at every turn. Don’t feel diminished in any way though if you resort to a little illumination to calm the nerves as Dead Space 2 will shock you, stab you and slaughter you at every turn.