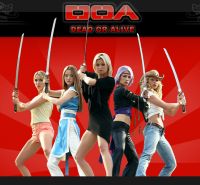 Nick has informed me that the Dead or Alive Movie will be released soon with the cast including, Jamie (my Name is Earl) Pressley, Holly (Neighbours) Valance, Devon (Sin City, 2 Fast 2 Furious) Aoki and Eric (brother of Julia) Roberts among others and Directed by Corey Yuen.

The trailer looks absolutely horrid and I fail to see the point of why we need something that seems to try and emulate the sort of ‘girl power’ and sense of humour that we have already seen in the Charlies Angels movies. How do they get permission to use the licence with what looks to be a bad idea on paper, however I haven’t seen the film (and probably never likely to) but here is the trailer:

I really wish the films that were inspired by computer games, would give the original justice by at least being serious or even better by being completely computer animated. I really have no hope at all for this film if the trailer is anything to go by. What are your thoughts though?

In Time Review for Apple iPhone, iPod Touch and iPad

it’s pure eye candy, take it on that level and it’s ok. having said that if and probably when they do a halo movie i’ll bury my head under a pillow and go la la la la as there is no way they can make afilm that compares to the game + books + my imagination.

I wouldn’t be totally worried about the Halo movie, Bungie are being very careful about the story in fact one screenplay had already been dismissed. Also don’t forget who is producing this film, Peter Jackson, thsi man knows how to make a stunningly visual film that also has depth.

I am still waiting to see how the Transformers Movie will turn out… Now that is making me worry, however there have been some good news released lately about the cast etc so hopefully won’t be another Thunderbirds!

I can think of at least 5 games could make excellent movies in my eyes, none of them would be fighting games. Street Fighter Anime was the only one to pull it off… when will ppl learn?

This trailer doesn’t seem to represent anything from DOA apart from a few cute chicks, maybe an animated film would have been a better idea but then i can only think it would have been filled with even more cliches.
Also..Peter Jackson might have done well with LotR but every film before and since wasn’t exactaly…good, although imo with the Halo the game was never really about the story and I was never bothered about it, no idea why they thought it would be a good idea to make a film..especially since (imo again) the idea of Halo was stolen from Starship troopers..should have just left it at that.

I’ve given up on “silver screen” video game movies a long time ago. They are trying way to hard and putting out way to many of these movies. Though I admit, I did go see Silent Hill, which was half OK and half crappy.

Man that looks totally crap! I wouldn’t substitute the hillarity of the in game realtime boob wobble for crap in film real boob wobble…

It sucks big time when they do things like this, I watched DOOM recently for a laugh when bored one evening, it was quite entertaining but this just looks naff…

Hello, well this is my first ever blog and I thought i would introduce myself. I’m Stuntgoat, don’t worry I’m not some farm yard animal forced to jump out of burning buildings so Tom Cruise doesn’t have to, though he’s abo…