Skip to content
You are here: Home > Platforms > PC > Day of the Tentacle – When an Evil Purple Tentacle Tries to Take Over the World! 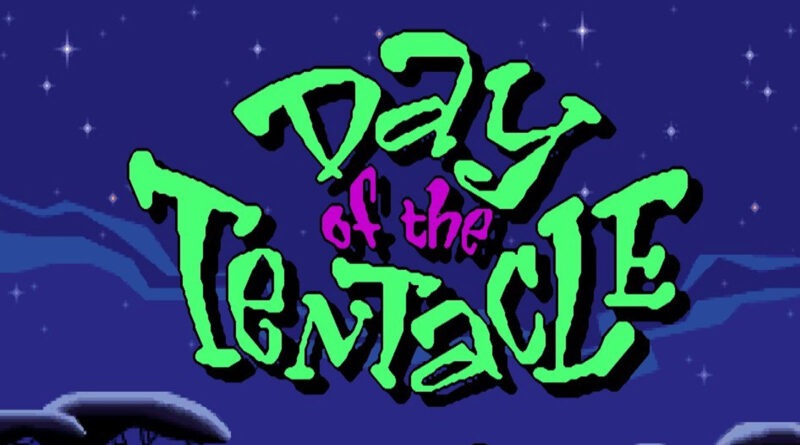 There is certainly a wild and wonderfully strange selection of stories available when you dare plunge yourself into some of the classic point and click adventures, however Day of the Tentacle may stretch your gaming mind to its absolute limit as you try desperately to prevent an incredibly evil purple tentacle from taking over the world!

Released in 1993 by Lucas Arts, Day of the Tentacle is the sequel to the holy grail of the point and click adventure genre, Maniac Mansion. Maniac Mansion introduced the ‘Scumm’ engine (Script Creation Utility for Maniac Mansion), which was used for numerous titles for many years to come.

It is a gorgeous sunny day, the fish are jumping, the birds are chirping, everything is one with nature. Behind an impressive and seemingly innocent mansion though, a disastrous polluting industrial waste is oozing from a pair of splurging pipes as two tentacles hop over to investigate. “Hmmmmm, I’m thirsty”, the purple tentacle announces as he takes a gulp of the strange concoction now flowing into the stream. Shrugging off warnings from his tentacle twin, he arrogantly replies “Nonsense, it makes me feel great, smarter, more aggressive”. “I feel I could… Like I could… Like I could… TAKE ON THE WORLD!”

It is left to one exhausted little hamster, armed with only a few scribbles on a piece of paper, to track down and inform Bernard Bernoulli, the only returning playable character from Maniac Mansion and his two unusual associates. These consist of the blond straggly haired stick figure called Laverne and the slightly over-weight rock lover Hoagie. Reading the note from Bernard’s old friend Green Tentacle, he discovers that Dr. Fred Edison has them tied up in his secret lab. Purple Tentacle has mutated into an insane genius and because of this, Dr. Fred is going to kill them both.

Bernard must risk returning to the mansion as he can’t allow this to happen, so without a moments hesitation, all three of them including the messenger ride at great haste, collecting a cow and a few chickens along the way for company.

Bernard succeeds in releasing his tentacle chums, however Dr. Fred is horrified when he learns of his stupidity. Purple Tentacle may even have a chance at succeeding in his devilish ambitions now. Bernard, Laverne and Hoagie must travel back in time using what looks like huge scientifically altered portable toilets, to stop the industrial waste pouring into the stream before it mutates Green Tentacle. Alas Dr. Fred’s invention was only powered by a cheap imitation diamond, that shatters into tiny pieces as our three saviours rather than heading back to just yesterday to stop the mistake, end up separated. Bernard is lucky, he returns back to where he started with Dr. Fred, but Hoagie finds himself two hundred years in the past and Lavern two hundred years in the future.

What changes Day of the Tentacle from most point and click adventures is the way you can control all three main characters in their respective time-lines. You will need to exchange items you collect, sharing them with each other to complete the puzzles you discover along the way. This is achieved by using the toilet time machines and literally flushing your collected bits and bobs. By clicking their profile picture, you jump from one hero to another (when available), which not only adds extra challenge to the game, but a wide and varied set of individuals to become acquainted with.

Hoagie will have the distinct pleasure of meeting a selection of famous Americans, including George Washington, Thomas Jefferson, Benjamin Franklin and John Hancock. Bernard will bump into their descendent’s, whose occupations hardly match their historic lineage and finally Laverne will endure the result of unleashing evil upon the world.

Day of the Tentacle was the last game featuring ‘Scumm’ to utilise part of the screen to display commands and an inventory. Instead, later titles such as Full Throttle included an updated engine version right click graphic for interaction allowing all of the screen to show the locations.

You will enjoy a delightful journey around the time-line, meeting some of history’s greats with a comedic twist and learning a great deal about their unusual habits as well as witnessing and changing past events. Bernard, Laverne and Hoagie are not the most obvious heroes to save the world, but they are the finest bunch of random individuals you could ever become acquainted with.

Featuring incredibly colourful locations, humour in every century and a talent for surprising the socks off you, Day of the Tentacle is yet another worthy addition to your point and click collection and of course compatible with ScummVM. Will we ever see a third title in the series? Telltale games have already released a set of brand new Sam and Max games, so here’s hoping this title isn’t overlooked!

[…] Day of the Tentacle – LucasArtsAnother gem of the many from LucasArts, the title features a tentacle (yes a […]