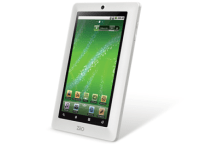 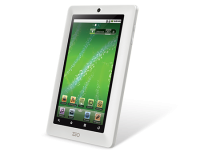 The tablet phenomenon has certainly taken off in 2010 and as we begin 2011 it sees no signs of losing any of its momentum. Creative have entered this promising new market with their own offerings, yet with a slightly different angle that plays to their own strengths – that is of course entertainment.

This is an ‘entertainment’ tablet that is designed to play your music and videos, view your photos and even link to your humongous television for the best presentation possible. The Creative ZiiO features a HDMI output, so if the 7” TFT screen isn’t enough to satisfy your media yearnings, a stonkingly huge widescreen television can instead take its place.

So what does the Creative ZiiO feature…

The Creative ZiiO comes in two varieties sporting either a 7” or 10” display. I have the 7” version and that actually seems to be the perfect size for the kinds of basic operations I wish to undertake – cased in a pleasing white surrounding. You also have the choice of either 8GB or 16GB of internal storage, although you can expand on this further using MicroSD cards.

The 7” resistive touch-screen display has a resolution of 480×800. It is best operated by using the included stylus (although a finger can trigger options on-screen) to achieve the best response, which feels maybe a little old fashioned by today’s standards, but at the £200 price point it is hard to justify anything more impressive. The display is nice and clear although the colour is a little bland and lacks any intensity particularly with the bolder colours.

Along the bottom of the screen are the typical Android buttons including Search, Home, Menu and Back. Unfortunately these are not illuminated in any way, so if you are browsing in the dark you will be working from memory and utliising a little guess work as well. Above the display is a fairly standard built-in VGA camera, so you can send video of yourself while using one of the compatible video and voice communication programs.

On the left-hand side edge, a MicroSD port sits awaiting additional media that can expand the storage of the Creative ZiiO with yet more of your personal media (up to 32GB). Along the top edge are ports for a USB connection to link directly with your computer (for transferring files), HDMI port for linking to a much larger display, internal microphone opening, headphone port and an on / off button. On the right edge are the volume controls, along the bottom a power input socket and sitting snugly behind are the stereo speakers.

The device contains a ZiiLABS ZMS-08 HD Media-Rich Applications Processor, which to you and I is a pretty snappy solution for a tablet. There are moments of slowness that creep in, however Creative do include a Task Manager to kill off any residual apps that may be sapping up memory and processing power beyond reasonable amounts.

As mentioned earlier, the proportions of the Creative ZiiO 7” seems to fit brilliantly for its main purpose and that is for casual Internet browsing, checking email, viewing media and even playing the odd game or two. It is very easy to hold the device in one hand and the stylus in the other – due to its sleek design and light weight, providing a pleasing and comfortable experience.

Google Android features prodominantly on smartphones, but it is known to transgress onto tablets as well. To say that Android was never really designed to be used in this larger form factor, the operating system actually works pretty well – offering the same level of user interactivity that you would expect in a manner that is rewarding.

My main gripe with any current Android tablet is that there is never any access to the official Google App area to view and download all manner of fascinating programs that will enrich your tablet pleasures. Instead, we have to rely on unofficial websites that may or may not stock the same apps we are looking for.

This annoyance aside, the whole experience feels perfectly acceptable and certainly not in any way confusing. Anyone who has experienced Android on a phone will feel right at home and I am sure newcomers to the touch-screen world will soon adapt to its methods of interaction.

The Creative ZiiO features a HDMI port for up to 720p resolution output. This is extremely handy for viewing your photos and videos through the television, allowing you to share your happy memories with the family or a video of someone falling over causing much merriment among your friends.

The HDMI output is limited to just the included Creative applications that are pre-installed, but using HDMI out with these works surprisingly well. When connected to a television, the tablet becomes the controller allowing you to operate the media with the most basic of commands.

Playback of compatible video is very smooth and looks superb as long as you take into consideration the power of the tablet. Formats include H.264, MPEG4, WMV9, MOV, AVI and MKV. Photo formats include JPG, BMP and PNG and finally audio support includes MP3, AAC, WMA9, FLAC, OGG, MIDI, WAV and the Audible Format.

Also included is Bluetooth hardware, allowing you to stream audio to other compatible wireless devices including speakers and headphones. I have the Creative ZiiSound D5 speakers and linking to these wirelessly with the Creative ZiiO worked tremendously well. Selecting music from the tablet and hearing the result somewhere in the distance is a wonderfully charming experience and is sure to impress your friends. Connecting to such a device is simple and Creative have added a widget (on-screen tool) that allows you to specify which audio equipment you wish to use at that particular time (if any). The internal speakers are certainly acceptable and present a decent volume although for serious musicality, a set of headphones or external speakers are certainly preferred.

The audio quality is further enhanced by Creative’s own X-Fi technology, which you may know of thanks to their sound card range. This is designed to at least give you the impression of additional clarity and detail, which can be adjusted on the tablet as you so desire. Creative’s own music player fulfils your musical moments absolutely fine, selecting artists, albums, playlists and so on with ease.

Sit Back and Relax

Once you have dabbled with the media offerings of this Creative tablet, you then move on to the standard features you come to expect. Browsing the Internet runs fairly well when connected to a WiFi network (b and g supported). Checking email is a routine task, but one we must all endure and again the tablet lives up to the basic expectations of this feature.

Gaming on a tablet though is quite an immersive experience. With tilting sensors and a touch-screen, you can have all manner of frantic fun especially on titles like Angry Birds and other compatible Android titles. The larger display also helps with your enjoyment and flicking birds towards those grunting pigs with such a piece of hardware is extremely satisfying.

Another recent fad is that of being able to download digital books (also known as ebooks), which can be read whenever and wherever you are. Rather than carrying a whole selection of physical books, why not go the electronic route and dabble with some of the classic literature available both free and for a charge. If the glare of a white background is a little too much for you, switch to a black background and white text and you have a very relaxing way to pass the time without disturbing anyone else in the process. 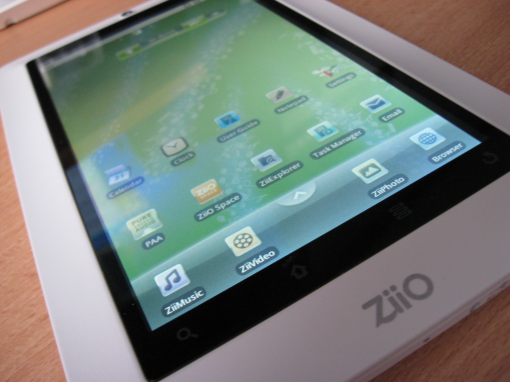 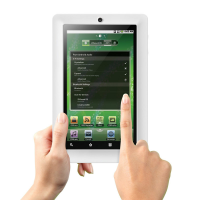 The Creative ZiiO 7” entertainment tablet includes all of the typical Android tablet features and alas its slight annoyances – yet it is a lovely little device for playing back your favourite content and even better watching it on your large HDMI compatible television or audio streamed via bluetooth with Creative’s X-Fi enhancements.

Tablets are evolving quickly and for the price, the Creative ZiiO is a respectable entry into this new exciting world of technology without breaking the bank.

Tripod – Gaming or a Bit of the Other?