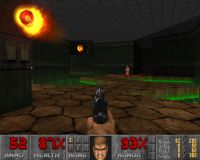 With all the talk of Doom for Xbox Live Arcade, I couldn’t help but load up my PC versions and started playing Doom, Doom 2, Heretic and Hexen all over again, however with a difference.

With an engine called Doomsday (which you can download from Doomsday HQ) you can not only play the game on Windows, but also add higher resolution textures, lighting, external music files (to replace the old MIDI music), 3D monsters and weapons (to replace the 2D sprites) and 3D surround sound. The higher resolution textures, models and music can be downloaded from various sites, but it is this engine that makes it all possible:

The Doomsday Engine is an enhanced and extended version of Doom, Heretic, and Hexen. It was originally based on the Hexen source code but parts of it have later been completely rewritten.

I love playing a lot of the older games from days gone by such as these classic first person shooters and of course my all time favourite point and click adventure games (thanks to the engine ScummVM) like Broken Sword, Simon the Sorcerer, Monkey Island etc…

If you have the original copies of these games, make sure you have a look at bringing new enhancements and life to these aging classics and rekindle some of those precious memories.

JDooM is very very buggy and just doesn’t feel like Doom. Might as well go play the classic Doom3 mod instead of play this port that crashed before I can even get past the launcher.

I prefer Skulltag because it has 32-player multiplayer. It has Deathmatch, Team Deathmatch, Capture the Flag, Terminator, Invasion, Possession, and several other game modes.

JDoom is known because it looks “pretty”. But now that Skulltag has GL based on GZDooM (optional) it can look pretty too!