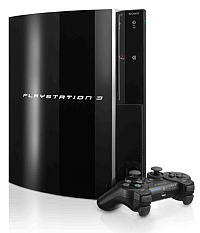 Yes I know, I can hardly believe it myself! I suppose with HD DVD going the way of the Dodo, many gamers like myself will be considering the same options. Should I get a possible Blu-ray add on drive for the Xbox 360 or should I just purchase a PlayStation 3 console and have the best of both next generation worlds.

Many will know that I have not been overly enthused with desires for the PlayStation 3. It has certainly had a rocky start to its life, but at least a sign of better times is well on the way. Price drops, a few must have gaming titles and Blu-ray playback have all factored in my decision to bite the bullet and give in to the dark side… Sony.

I am a little disappointed that there is no PlayStation 2 backwards compatibility in the 40GB model, but when you consider the cheaper price, your wallet certainly looks a lot healthier. I decided to purchase a bundle from HMV, which included the 40GB console, HDMI cable, Ratchet & Clank Future: Tools Of Destruction, Uncharted: Drakes Fortune, Casino Royale and Spiderman 3 Blu-ray high definition movies all for £359.99. I also opted for the Blu-ray PS3 remote control.

So having received my PlayStation 3 console, someone I know called Cat followed my unpacking on Skype creating a step by step account of this process with me totally unaware:

I did get there in the end. I remembered my password, the PSP connected and I can stream video from my PS3 directly to my Sony portable and the Bluetooth key I guessed after several attempts.

Before I go though, just a little word about Lemmings on the PS3. Yep, Lemmings has captured my attention yet again and already those little green haired chappies have been screaming out at me as I let them to drop off the edge of the map. I can be cruel!

The graphics are super dooper in high definition and it is so nice to play a classic game, enhanced so lovingly in this way. My next PS3 blog entry will list my likes and dislikes of the console. I have quite a few dislikes already I am afraid, however all in all I am very happy with my purchase. Let the good times roll.

Sony PlayStation Home – Social Mingling with Exploration However Why?

Well, to be fair that was only about a third of your conmplaints!

It’s amusing how many jokes there are about passwords!

Yes you had a right old chuckle at my expense :-?

I have considered getting one as well, but would only do it after selling my 360… . No monthly fees sure is a plus. But most of all, the shiney black would match my Samsung TV!!