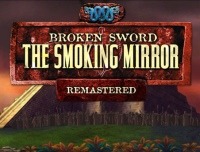 I have previously reviewed the first game in the Broken Sword series for the iPhone/iPod Touch and now I am happy, actually ecstatic, in covering the sequel Broken Sword – the Smoking Mirror: Remastered for iPad, iPhone and iPod Touch devices. The title was originally released in 1997 at a time when 2D point and click adventures were slowly ebbing into near oblivion, yet with a few crafty tricks up their sleeve, they weren’t disappearing without a fight.

This is just as apparent as we see its release on the Apple iOS platform in a remastered update, which sees a few additions that firstly make it easier to play on a smaller touch screen device and secondly a selection of new features. These additions will delight fans such as myself who played the original and newcomers who have missed out on the genius provided by the series.

Back in Paris, George somehow finds himself yet again in a plot full of dastardly developments with Nico along for the thrilling ride. What should start out as an innocent trip to see an archaeologist by the name of Professor Oubier, soon begins to raise suspicions as the door is answered by an unexpected central American – who invites them in to the start of yet another adventure. Poor George is whacked over the head and Nico is hit by a dart, which was sent hurtling through the air from a blowpipe peeking from behind the curtains. It is up to George to rescue Nico and unravel the mess he has found himself in yet again. You will also take control of Nico within sections of the game, which provides a little variety along the way.

Many of your favourite characters from the original Broken Sword will make guest appearances in this charming sequel, including love rival Andre Lobineau – much to George’s dismay. Nico of course also re-appears as George’s love interest, although the sweet and lovely vocal talents have not crossed over from the first game and instead we have quite an abrupt less sincere representation of our favourite feminine star of the series. Overall though, the overwhelming care and attention is clearly evident while providing many hours of humour along the way. The music also provides a key role – bestowing the needed tension and relief with the usual Broken Sword shock and awe. Locations although for me personally not quite as intriguing as our first encounters, continue the trek around the rich and diverse world including Paris, London, Caribbean Islands and even Quaramonte.

Point and click adventures have certainly found a new home on touch screen devices and actually feel better suited to this new environment. Using your finger to explore the various locations and triggering conversations with the occupants of this diverse story is an absolute joy. There have been a few enhancements to make the process a little smoother including object highlighting. Holding your finger on the screen reveals objects or characters that you may interact with. Hovering over such an area will reveal additional options such as pick up, look at, operate or talk to. In the lower left corner is your inventory that stores all of your collected items and using this with other objects is just a matter of dragging from one area to another. On the smaller touch screens, getting your character to move as intended can be a little tricky however you persevere.

The remastered edition also brings new comic book like character panels when a conversation is in progress. Appearing in the top corners of the screen are character animations similar to those found in the Director’s Cut version of the first Broken Sword. These panels are far more elaborate than ever before as they also reveal movable mouths indicating not just expression but also this time speech.

For those that might have one day searched for an online walkthrough when reaching a point at which progression seemed impossible, a built-in hint system is available which you can use as sparingly or as vigorously as you desire. If you wish to enjoy the exploration and brain teasing object usage, you are best minimising this particular feature.

Broken Sword 2 Remastered once purchased will play on either iPad, iPhone or iPod Touch. If you are lucky and own for example both an iPad and an iPhone/iPod Touch – with just your single purchase it will be playable on either device. Your next concern might be that of saved games and how to continue your progress. This isn’t overlooked by the clever developers as they have included Dropbox, which is a free service that in this instance allows you to manually upload and download Broken Sword 2 saved games. This allows you to first play on your iPad when sat comfortably at home and then when daring to step outside, whip out your iPhone and continue exactly from where you left off. It actually works out to be an elegant solution to sharing such information between devices and will certainly live up to expectations until Apple themselves deliver a suitable alternative.

Whilst playing Broken Sword 2, you will come across unlockable content including an interactive digital comic for your personal reading enjoyment. Also integrated is the new Game Center recently provided by Apple, which awards you with achievements based on game progression.

Although I prefer the original Broken Sword as a story, the sequel and its new remastered updates are certainly worthy of your devotion as the series continues through yet another mesmerising plot of intrigue and wonderment. Add to that the careful consideration given to sharing saved games between devices and the remastered additions create a title that demands your attention and affection.

If you own either an Apple iPod Touch, iPhone or iPad – you would be wise investing in both the first Broken Sword and the sequel. Both catapult you into situations of pure joy and excitement, where point and click adventuring makes a leap away from the cold of darkness of the past and back into the heavenly light on the new touch screen revolution. Thanks to Broken Sword II Remastered – Happiness is an iPhone job, if your name is Mary, if your name is Bob.

I still want a online walktrou, can not understand the hints!!! Do you know a good one?

[…] on iOS devices for quite some time now. I reviewed the iPhone, iPad and iPod Touch versions of Broken Sword: Director’s Cut back in December 2010. An enhanced version of the iPhone classic, which itself earned an average […]