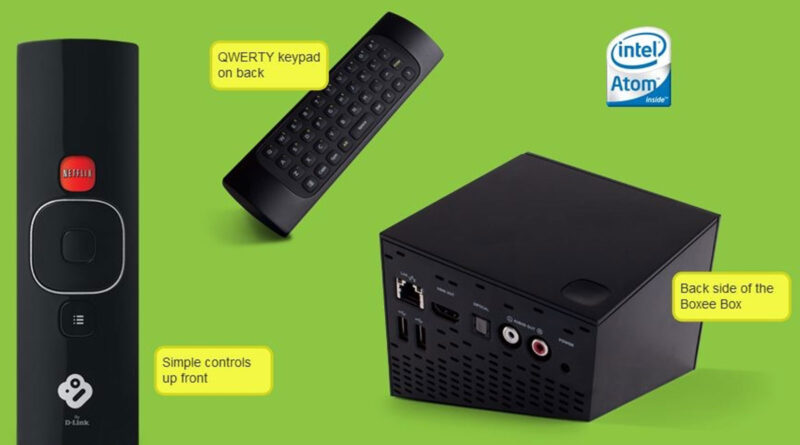 Many of the latest high definition televisions are starting to include built-in media players, giving consumers the chance to view various content including music, photos and of course video on a large display. You may be one of those people who don’t wish to upgrade your existing television to earn these new capabilities, but still wish to enjoy the same functionality and a little more besides without the investment a new HDTV would require.

Quite a few companies are now releasing external devices that allow you to transform your television into a media hub, rich with new online content. The creators of Boxee Box have set out to be the hub of all your entertainment needs, giving you the option to share your wonderful memories, pulsating beats and home movies with friends and family on a substantial and impressively sized display.

Boxee Box is quite literally a small plastic box, although it seems this didn’t go far enough for its creators. Imagine someone with a chainsaw picking up the Boxee Box and slicing through part of the bottom section and you have some idea how this looks. It’s slanted to one side and from the rear, actually looks like it has sunken into the surface it’s sitting upon. This surprisingly turns out to be a wonderful design, giving the unit an immediate “what’s this all about” admiration from anyone who notices it by the television.

The front of the box includes a glowing Boxee logo when switched on, the left hand side features an SD/MMC slot for viewing additional media content and to the rear is where all the main connections exist. A wired LAN Ethernet port, HDMI out, optical audio, audio out left and right channels, two USB 2.0 ports and a connection for the power supply.

For those who don’t have a wired Ethernet (LAN) cable close by to where the Boxee Box will be placed, also included is built-in wireless capabilities – allowing you to connect to your wireless router to gather all manner of content be it movies, TV shows, images, audio or other video sources.

The remote control also features small proportions, yet includes plenty of functionality. The front includes a play/pause toggle, back, directional controls to navigate around the Boxee interface and a select button. Flipping the remote control over reveals a full miniature QWERTY keyboard, perfect for entering in text especially when searching for content or entering details.

Although the Boxee Box includes a cooling system that entails the use of a fan, you very rarely hear the unit even when content is played back at very low levels. It is audible, but certainly nothing that will interfere with your viewing enjoyment.

Connecting exclusively via HDMI, the Boxee Box supports right up to 1080p resolution as well as other popular selections.

Boxee Box is bolstered by settings that fully customise the viewing experience. By creating a free account and adding any Facebook or Twitter identities you posses, the home screen lights up with all kinds of media that should be of interest to you. It calculates this by looking at your Facebook friends and individuals you follow on Twitter to generate a list of video content they have shared. Ordinarily, you would use your computer or smartphone to enjoy their shared videos, however through the use of Boxee Box – you have the advantage of utilising your larger television screen to view often hilarious content that has be shared by people you know or follow in a far more satisfactory way.

Boxee Box also has a huge list of what they term ‘Apps’ to give you access to various providers of content. One of their more notable recent editions is that of Spotify, a premium music streaming service that allows you to listen to a vast library of music for a monthly subscription.

Other apps include BBC iPlayer, giving you the opportunity to watch any missed BBC programmes whenever you wish and even in high definition on certain popular shows. The Revision3 app offers various technology shows as does one of my personal favourites provided by the TWiT network. Of course, a YouTube app is also featured allowing you to log-in to your account if you have one and view any channels you are subscribed to, your own videos and search for additional content in their crazily vast library of videos uploaded constantly by users and corporations alike.

These apps are updated and expanded almost constantly with currently over 200 on offer, the vast majority available for free without any kind of subscription involved. Whatever your interests, I am sure you will find content that will be of interest to your tastes. Even if there is no app for your favourite podcast, you can add your own RSS feeds be it audio or video based and view them right on your Boxee Box.

So Boxee Box utilises your Internet connection to access all kinds of entertainment and factual programming through the use of apps and your Facebook and Twitter profiles, however what about your own content you store elsewhere?

The Boxee Box doesn’t feature any of its own storage, so if you wish to playback content of your own not available over the Internet – you will need to connect your own storage mediums. This could include adding a USB stick or USB external hard drive with content on for playback through the Boxee Box. Another method is to have your computer switched on, using media sharing options within your operating system so the Boxee Box can access your media.

If you are really serious about accessing your content though, particularly if you have thousands of music files, images and home videos – a NAS (Network-Attached Storage) hard drive is the perfect solution. This external hard drive is connected directly to your router and shares the content over your home network either wired or wirelessly on many devices including of course in this instance, the Boxee Box.

Playback compatibility is pretty astounding, managing to cope with all kinds of different audio and video formats without any issues both in older and much newer formats and resolutions.

The menus are very straightforward to use once you understand the basics and present themselves well. It’s easy to switch from one app to another or select your own media content using the extremely simple controls via the included remote. My only gripe in this area is the lack of consistency throughout the entire experience. For example, the remote control features a back button that within most areas hops you back to a previous screen – however within apps such as the BBC iPlayer, you are required to press ‘Select’ on the remote and select ‘Back’ from the menu – otherwise you leave the app rather than stepping back to a previously viewed screen within the app. Play and Pause also don’t work as you would expect and again within BBC iPlayer, you need to press ‘Select’ on the remote and select the relevant button on the menu rather than the button on the remote you would expect to utilise. This is quite an unfortunate and confusing area of Boxee Box that needs to be remedied as otherwise Boxee Box is a very pleasing navigational experience that people should pick up in no time at all.

You can even surf the Internet with Boxee’s own browser, which runs pretty fast and renders most pages perfectly well. It’s unusual navigating using a remote control, which is a slow method of moving an on-screen cursor around the screen – however it’s far nicer to have the option included rather than not at all – especially for sharing with a larger group of people.

Content can also be shared within Facebook and Twitter, so if you find a video of interest you can link to it using these services – all within Boxee Box.

Unfortunately there is no way to currently play DVD movies direct from an optical disk, however you can use third party software to rip (copy) a DVD allowing the files to be played from various storage options. Not ideal, but at least an option.

The Boxee software is also available to install for free on your computer be it Windows, MAC or Linux based. This will also give you a little taste of what you can expect with the software on the Boxee Box and the content it provides. It’s not as tidy a set-up as the Boxee Box, as you rely on connecting your computer to the television with either HDMI if your hardware supports it or via the VGA port and audio out sockets. You can of course just use the software for playback on your computer without any external devices connection.

You can also install the free Boxee app to your Apple iPad, which allows you to enter your account information and access your Facebook and Twitter feeds, displaying shared videos right on your tablet. Using AirPlay, this can also be streamed to your Boxee Box and even playing back content that doesn’t feature copy protection can be played back on your Boxee Box, streamed right from your iPad and even iPhone.

Boxee Box is more than just a box, it’s a doorway into another universe of content transforming your television into an amazing hub of fascinating media both online and of your own creation.

Viewing images, listening to music or watching videos has never been so easy thanks to the Boxee Box and its vast collection of over 200 apps – new offerings for both entertainment and factual information accessible on-demand from a variety of sources both well known and independent.

Having used the Boxee Box for a month now, I can’t imagine my television without it!

Thank you to Dabs.com, who were kind enough to send this product review sample. 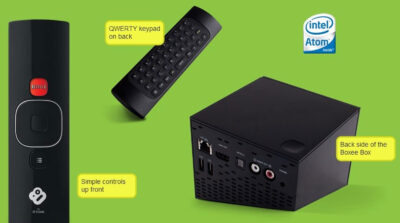