Skip to content
You are here: Home > Platforms > Apple > macOS > Bejeweled 3 Review for PC and Mac – A True Gem in the Bejeweled Series 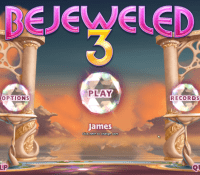 My first experience of Bejeweled occurred on the original Xbox as part of the Xbox Live Arcade feature, which back then came on a DVD disk. Since then, Bejeweled has appeared on various formats in slightly different forms, however retaining that all important jewel busting exercise.

The latest instalment appears as Bejeweled 3, that enhances the original puzzle style and provides addtional mini-games for you to explore and enjoy over many countless hours. Bejeweled 3 is literally littered with game variants, but before we delve into these superb additions – I should first explain the basic premise behind the Bejeweled series.

No matter which mode you select, the basic idea remains the same. You must match at least three coloured gems in a row to remove them from the screen allowing others to drop from above. Matching 4 or more reveals a special gem that when next matched or selected has an explosive effect on the rest, hopefully resorting in a massive point scoring cascade that can often be viewed back in an instant replay.

You need to progress as far as possible in the standard ‘classic’ mode until you have no more moves left, to which the game ends and your dreams of a high score are shattered. There is a certain amount of careful planning involved to reduce this harsh reality and my method is to always leave a possible match near the bottom of the screen as a final option, clearing the above selections as soon as possible. Constantly scanning the game area for matches of 4 or more will be your saviour if you can reserve them and devastate problem areas for when times become difficult and trust me they will.

As addictive as this old-school mode is, there is still so much more to Bejeweled 3 than this one standard option…

‘Lightning’ provides a fast action packed timer based variant, where your speedy reactions are a must if you wish to earn yourself a decent high score. As you match the gems, new ones will on occasion appear with numbers placed upon them. These extra special gems once matched increase the amount of time you have left to continue earning points. When the time runs out, the game is over.

Zen is probably the quirkiest mode of them all. There is no actual competitive goal to this option, instead the idea is to take a moment and relax in the calming background sounds of birds chirping and other sounds that are meant to provoke a chilled-like state. The music is switched off and you bathe yourself in the thrill of reaching higher and higher levels without the risk of it all coming to an abrupt end. You can’t fail at all in this mode and this is further enhanced with options to tweak the ambient sounds, the rate of breathing in and out sounds you mimic with your own respiratory responses, mantras to offer statements that can be set to encourage positive thinking or to quit bad habits and even binaural beats that with headphones are designed to stimulate your mind into different states by playing various frequencies in each ear. Yes I know, very bizarre!

Quest offers a selection of all of the modes available within a progressive path of difficulty. Each tier offers a myriad of your favourite modes where some or all need to be completed before you can advance to the next stage. With each passing stage, the difficulty of the modes ramps up a notch by increasing the number of matches required or reducing time limits.

By enjoying all of the above modes, you will eventually (and actually quite easily) unlock another four selections offering even more enjoyment along the way…

Poker requires you to match gems far more intelligently, by matching them with a poker-like thinking. You can with careful selection trigger a Full House, 4 in a row or if you are struggling just a single pair. Ice Storm adds the pressure of watching ice peaks appear on the screen, which can only be removed by matching gems in the same area, however if they reach the top and stay there for a set period your game is at an end. Diamond Mine requires you to match gems along the bottom rows to dig and drill further down the screen, locating precious items and gold – just don’t hang about though or your drill will cease to function under the tremendous pressures. One of my favourites though has to be Butterflies, which sees you matching gems that resemble a butterfly with the same coloured gems to remove them from the screen – just be quick about it though as when they reach the top of the screen stepping up one row with each turn, they run the risk of being caught by a scary looking spider who has a taste for our fluttery friends.

All of these modes are lovingly wrapped in high resolution graphical splendour, with animations that tear up the screen in spectacular fashion. The sound effects and music more than match this visual treat, with a great variety of catchy tunes that change depending on your selected mode.

Unfortunately Bejeweled 3 is lacking any online functionality, so don’t expect to see online leaderboards or any multiplayer options unless a pretty meaty update is released in the future. This is an incredible oversight by the developers, especially when the Steam platform offers friends lists which should be tied in so you can compete with their scores – but alas it wasn’t meant to be. Instead, your own solitary experience is rewarded with badges that increase in value (bronze, silver, gold and platinum) as you reach ever higher targets.

Bejeweled 3 is a wonderful puzzle game that will delight every fibre of your body. Although the basic gameplay remains fairly constant throughout all of the selection of mini-games, the quirky twists employed add a wonderful variation on an already entertaining puzzle concept.

It may feel quite a solitary title with the lack of any online elements, however Bejeweled 3 certainly makes up for it with fantastic animations, high resolution graphics, explosive sound effects and captivating music.