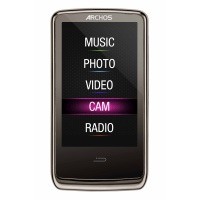 I have already taken a look at the ARCHOS Clipper, however moving further up the capabilities in the range brings us to the ARCHOS 3cam Vision. This is a 8GB portable player supporting music, photos and even video on a 3″ TFT screen.

The unit itself is very small and incredibly lightweight. Fitting easily within a pocket, the ARCHOS 3cam Vision is certainly perfectly portable for your media on the move requirements.

The 3″ TFT screen is certainly adequate for the job at hand and with the addition of touch screen technology, navigation is far simpler as well compared to an array of buttons. In fact the only button you will find yourself pressing with any regularity is ‘back’, which is located just below the screen in the middle to hop ‘back’ one place within the menu system. Pretty much every other command is controlled using the touch screen – so selecting music, scrolling the titles stored on the device or configuring options are all fairly easy to accomplish.

Scrolling for example can be achieved by using one of two alternatives. Firstly to scroll is a matter of sliding your finger up or down the screen, although for longer lists this may be a tiresome exercise. For the avid music enthusiast with hundreds of songs, a virtual dial appears on the lower right of the screen which you can rotate either clockwise or anti-clockwise to speed along the mass of content. You may need to press quite firmly in places to get a response from the touch screen, but it manages well for the price point of around £75.

The ‘Home’ screen, which is the first area you are presented with when turning on the device, lists the standard options for viewing music, photos and video. A neat little addition is a built-in camera for taking a photo or recording a video. The quality isn’t the best especially as the two resolutions available are limited to 320×240 or 640×480, but if you are admiring a thing of beauty and find yourself without the means to capture it, the ARCHOS 3cam Vision may be close by so you don’t miss out. You can also listen to FM radio with the headphones plugged in acting as an antenna, which can also be recorded for later playback. 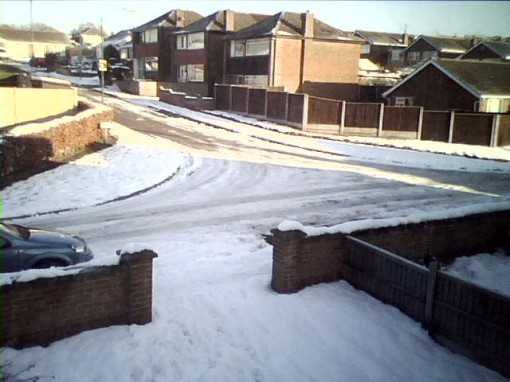 There is actually a second menu available hiding off to one side, which is accessed by sliding your finger across the screen horizontally either way. This area features a calculator, calendar, recorder, and file browser. This second section also houses the device settings, allowing you to change the wallpaper and many other personalised options and configurations.

With a great variety of formats that are compatible for playback, the ARCHOS holds it’s head pretty high compared to offerings from other manufacturers. Although Apple are considered the ‘must have’ portable players, they are limited by the file formats they are able to present out of the box.

Here though the compatibility is pretty impressive and with the 8GB capacity, you have plenty of choice and storage for a good selection of photos, music and video. 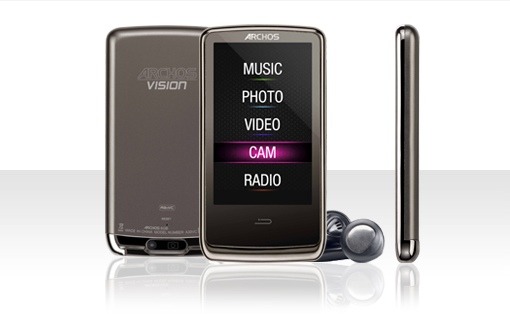 With the correct video bitrates, the playback is clear and smooth. Watching an entire film or short animation equally provide bursts of colour and enjoyment. Audio quality is clear and allows for a fairly meaty volume level.

Copying your media over to the ARCHOS is certainly straightforward. Plugging in the USB cable to your ARCHOS and then to your computer, you can simply drag and drop compatible files over to your new portable device with USB 2.0 transfer speeds.

When you are amusing yourself by listening to your favourite tunes through a set of headphones everything is awfully swell. Once you pop into the car though, the desire to enjoy your music through your car speakers is an obvious one. Unfortunately a method of plugging in your portable media player via a line-in port is often a feature lacking in a car entertainment system. Unless you have gone to the extra expense of upgrading the standard in-car entertainment unit with a fancier specification, you can often find yourself stuck.

One method of getting out of this annoying conundrum though is to use an FM Transmitter. The ARCHOS 3cam Vision has one of these built into the device, allowing you to transmit a radio signal that can be received by your in-car system’s own radio receiver. It is a matter of first inputting an empty frequency that isn’t used by any of your local or national radio stations. Once set, you then configure your in-car radio to the same frequency and as if by magic, the sound of pounding bass undertones recognisable from your no doubt awesome musical playlist – appear through the car speakers with all the power and amplification you usually relish in at home. In fact you can improve the signal strength by leaving the headphones plugged in to the ARCHOS. On long distance journeys you may need to adjust frequencies slightly as you roam into new areas that feature different local stations that could possibly interfere with your settings.

For the price of around £75, the ARCHOS 3cam Vision offers a nice selection of media functionality while also having the added benefit of utilising a touch screen. Navigation is straightforward if a little squidgy at times, but the screen is easy to read and provides a good alternative to the Apple domination we usually see in this area. The built-in FM Transmitter allows you to play your music through your car speakers in all their glory and if you wish to take a photo or record a short video, there is that facility as well.

Features that lacked a little: