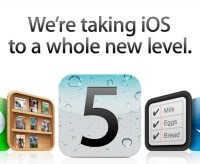 Yesterday, Apple announced a whole new era of software as we move to the cloud with the typical Apple branding of sticking an ‘i’ in front of a word – in this case ‘iCloud’. Disconnecting the iPhone, iPod Touch and iPad dependency from a computer and opening it up to wireless synchronisation of music, apps, books and more.

iOS5 finally sorts out the notification ugliness, instead placing them at the top of the screen – similar to competing smart-phone devices utilise already today, but with the usual Apple gloss. Mac OS X Lion releasing in July is only available through the Mac App Store for a very reasonable £20.99.

Below are the two videos Apple have released highlighting the features of iOS5 and OS X Lion: