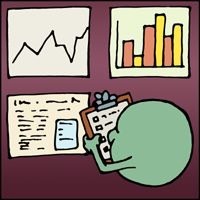 When considering the enormity of app design, one of your first steps should always be to analyse any possible competition to your project and whether your wonderful brainwave has actually already been released to the world in some form or another.

Before we even venture to this conundrum, you need that all important bright idea or inspirational moment, which can be just as terrifying. Fear not as now we shall embark on a little adventure of our own, examining a small selection of apps that are already available – tried and tested by the millions of users who now own app compatible devices.

There are so many directions I could guide you through and trust me the app landscape can be a pretty brutal one with such an enormous population of hungry developers and publishers. Take heart from the fact that success is achievable and the app world is a truly exciting area to explore.

Apps appear in many variations of design and functionality, yet there are key elements that you will notice on our journey. The really special apps contain something that leaps out at you in a single glance. This could be a very elaborately animated interface, a fully featured tool or indeed something completely wacky that catches your attention by outright tomfoolery.

So without any hesitation, let’s take a look at a few apps I personally handpicked for various reasons and hopefully it will stir those creative juices…