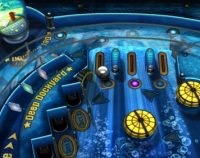 Pinball machines were at one time the cutting edge of gaming design introducing terms such as plunger, bumpers and flippers. Grasping hold of a wooden cabinet and pressing two buttons vigorously in anticipation of a score that even a non-gaming parent could be proud of.

To Coin a Phrase

As a young gamer, the need for the kind of money that jangled in your pocket was great when roaming the various arcades. It proved to be a quick and foolproof method of getting into bother – spending your entire week’s worth of pocket money in a single day.

Arcades may be considered a thing of the past, yet the classic forms of gaming excellence from this era continues its successful presence within the app marketplace. Best of all, to enjoy this thrill ride, a collection of coins isn’t required. Instead one single payment will ensure multiple visits to the table, without risking the angry faces of your financiers.

The Sights and Sounds of Pinball

Featuring a selection of tables that more than satisfies your thirst for all things Pinball, Pinball HD offers an accurate representation of the key elements that existed in its original form. The dazzle of the blinking lights – the sound of plink, plonk, plunk as your shiny ball hurtles around the table and the wonderful lunacy of it all bring back memories for those who remember the Pinball glory days, while also giving those younger tykes who missed out on this period a chance to experience an important part of our gaming history.

The lack of buttons presents a major problem for game designers and as Pinball relies so heavily on rapid button pressing, matching the same sensation is difficult. Thankfully pulling back the plunger to release the ball can easily be replicated by just dragging your finger down the screen, however to get around the lack of buttons, Pinball HD asks you to press either side of the screen – triggering either the left or right paddles respectively.