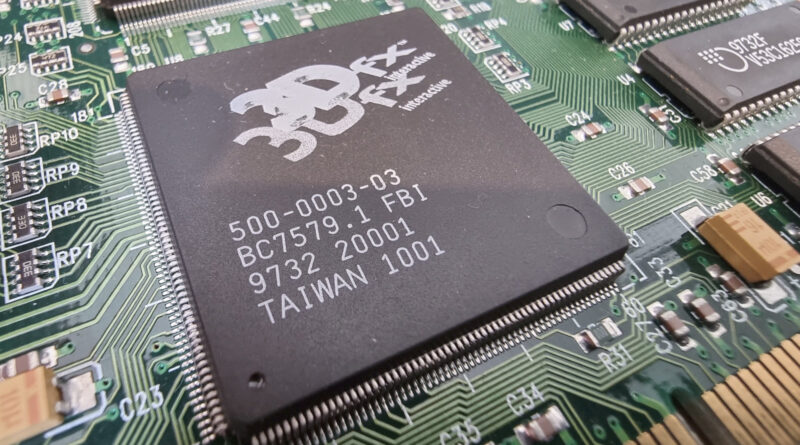 It’s easy to take for granted the 3D graphics card or even onboard graphics capabilities that power our PCs today. Where speed and features may differ slightly between different manufacturers – the market selection is actually very stable. By this I mean, you can buy any 3D graphics card and know when you get it home and install it, you will be playing your favourite 3D games without any serious issues.

Back in the early 1990s, this was certainly not the case for the PC platform. We may reflect on wars between two different technologies like the classic VHS versus Betamax, however for the 3D world – there were far more than two choices and each with wildly different compatibility and support between games. It was quite frankly a painful time to be a PC gamer as the 3D graphics accelerator you chose with its often quite expensive retail cost could lead you down the path where dreams are made or where polygons and textures misbehaved… or simply didn’t work at all!

In 1996 though, there was one card you could rely on. Where speed was blisteringly fast and graphical presentation proved that software rendering alone was no longer enough for our gaming rigs.

In reality though, what it gave you was a glimpse of the 3D future and a compatibility with 3D games that was unrivalled. The support for 3Dfx cards and their own proprietary Glide API was vast, far outstripping its rivals. Price was a big selling point for the card as for the rewards you received in terms of visual power, was actually a reasonably priced card compared to other so called big hitters at the time. They all had their claims of 3D greatness, but it was the 3Dfx that actually achieved it.

Let’s take a classic example, Tomb Raider. The software rendering engine of the game was pleasant enough albeit very low resolution. There was a high resolution mode available, but this brought most PC CPUs down to its knees and resulted in a stuttering mess of a framerate. A patch was soon released for 3Dfx based cards and suddenly you could enjoy a silky smooth gameplay that was ultra responsive to your commands with all kinds of graphical pleasures that smoothed out all the rough edges and provided a real delight for the eyes to feast upon.

My previous so called 3D accelerator card was the Matrox Mystique 220. A well reviewed 2D card of its era, but for 3D there was certainly no jaw dropping visual satisfaction. For Direct 3D supported titles, it did push the pixels faster than software rendering alone, but that was about it. I actually still needed the Matrox Mystique 220 installed in my Pentium 233GHz PC as the 3Dfx cards for the first generations lacked any kind of 2D capability. Instead, you hooked it up with your 2D card using a passthrough cable.

For the next few years, 3Dfx technology dominated the market with its raw power. Other contenders for the crown did come along in the end and it was cards from NVIDIA with the Geforce graphics card that began to show the new strengths needed to power our 3D gaming. 3Dfx would ironically be purchased by NVIDIA as in the end, the Voodoo range just couldn’t keep up with the rapid advances coming through to the market and some even suggest that the SEGA Dreamcast console not using their technology helped seal their demise.

Whatever the reasons, the 3Dfx era was a truly splendid one. It’s when I sat in literal awe at what was being presented on the screen in all its 3D accelerated glory. It transformed 3D polygons into a medium PC owners could finally enjoy that would rival and often beat their console counterpart offerings. It was magical to experience as the advancements in resolutions, starting from 640×480 and moving quickly beyond in subsequent generations transformed the way we experienced games dramatically and to watch one in action today still brings a sense of pride that I owned one and lived this vital transition in the PC market.

It is why to this day, my gaming nickname is ‘GlideManiac’.

You can view Neil’s own experiences of the 3Dfx within his video for RMC: