Point and click adventure Inherit the Earth: Quest for the Orb originally released in 1994, featuring a selection of characters based on animals, who stood confidently upright and could even hold a meaningful conversation. The introduction also mentioned the mysterious disappearance of humans, so where did they go?

A sequel is already in development, with a possible release in November 2013. Utilising the Kickstarter website, Inherit the Earth 2 hopes to reach their goal of $135,000 within the next 25 days to ensure its completion.

Inherit the Earth 2 is the sequel to the video game Inherit the Earth: Quest for the Orb. Like the original, this sequel will be in the adventure genre, where exploration, puzzle-solving and story-telling are the major aspects of the game play.

This sequel will be produced by The Wyrmkeep Entertainment Co. and feature entirely new art, music and story, incorporated with a modern adventure game engine. We expect that a number of the developers that worked on the original game will be involved in developing the sequel.
Inherit the Earth 2 Kickstarter

The Kickstarter has been cancelled with the following explanation:

Well, the final project video did not come out the way I had hoped, and additional changes to the video cannot be made in a timely fashion.

Which leads to the problem that the overall presentation of the project is simply not compelling enough to convince non-fans of the original game to pledge, and it’s now obvious that the project will not reach anywhere near its funding goal in the 20 days remaining.

Therefore, I am cancelling the Kickstarter.

I would like to thank everyone that did pledge!
Inherit the Earth 2 (Cancelled) on Kickstarter

To Simply Point – The Wonders of Point and Click Adventures

Enjoying the wonders of point and click adventures and reliving this important genre today. 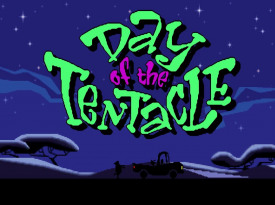 Day of the Tentacle – When an Evil Purple Tentacle Tries to Take Over the World!